Original article.  The entire country should know these details; we are ALL border states now. Please watch the video! Several additional thoughts. The asylum system does not have to be as robust when the ineligible ones have been screened out. The Biden policies have disabled border security against major threats such as terrorists, MS-13, drugs, etc. At the same time the policies have greatly enriched the cartels which will commit more crime against our country.  And now, refugees from Afghanistan, who may not assimilate well, will be pouring into our country.

See the form at the bottom of the Original Article to “Sign the Pledge to Stop the Left’s Socialist Agenda.” 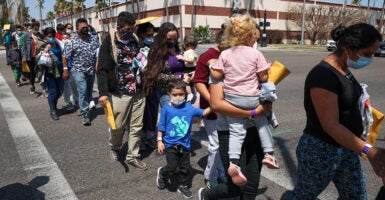 For six months, an overwhelmed southern border joined COVID-19 as the dominant headline. Now the two stories seem to have merged.

Almost one-fifth of illegal border crossers in federal custody tested positive for the coronavirus that causes COVID-19, according to a Department of Homeland Security document leaked to NBC News.

Texas cities such as Laredo and McAllen have had to bear the brunt of illegal immigrants with the virus.

More than 18% of families and 20% of unaccompanied minors who illegally crossed the border tested positive for the coronavirus, according to the NBC News report on the Department of Homeland Security document.

That DHS document was included in a briefing for President Joe Biden, NBC reported.

The DHS document also showed that more than a quarter of illegal immigrants who were being deported tested positive, requiring U.S. Immigration and Customs Enforcement to remove them from planes.

The COVID-19 among illegal immigrants is because of “the highly transmissible delta variant combined with lengthier stays in crowded [U.S. Customs and Border Protection] facilities,” the document says.

Employees at a shelter run by the U.S. Department of Health and Human Services in Fort Bliss, Texas, filed whistleblower complaints alleging that supervisors told them to downplay the number of migrant children who tested positive for the virus.

This is a result of the Biden administration’s lax border policies, said Lora Ries, senior research fellow for homeland security at The Heritage Foundation, the parent organization of The Daily Signal.

“We are importing COVID cases,” Ries told The Daily Signal in a phone interview, adding of the Biden administration: “They did so knowingly and negligently and the outcome was entirely predictable.”

The increase in the number of illegal immigrants who test positive for the virus poses a threat to both public health and the U.S. economy, said Ira Mehlman, spokesman for the Federation for American Immigration Reform, which favors greater border security as well as stricter limits on legal immigration.

“The Biden administration’s policy of open borders is above all other considerations, including COVID. It’s worse than insanity,” Mehlman told The Daily Signal in a phone interview. “They are playing Russian roulette with American health and the economy in pursuit of a political objective.”

Homeland Security Secretary Alejandro Mayorkas addressed the matter Aug. 12 while delivering public remarks in Brownville, Texas, where he said that unlawful border crossers are not the cause of an increase in COVID-19 cases.

“Our capacity to test, isolate, and quarantine the vulnerable population that makes a legal claim for asylum is stretched,” Mayorkas said.

He did take time in the speech, however, to cast blame on the Trump administration.

Former officials have said the Trump administration actually improved the process for asylum-seekers by instituting the “Remain in Mexico” policy, which Biden ended.

“They inherited a system that worked,” Mark Morgan, former acting commissioner of U.S. Customs and Border Protection in the Trump administration, told The Daily Signal in March.

The Biden administration is addressing the matter, Mayorkas said in his remarks last week.

“We are seeing an increase in [the] positivity rate among the migrant population,” Mayorkas also said. “We built an architecture to test and isolate the migrants who make a legal claim for asylum.”

The Department of Homeland Security did not respond to questions submitted by The Daily Signal.

Federal authorities aren’t testing a significant number of apprehended illegal immigrants before releasing them into cities because of the sheer volume, the New York Post reported.

But cities lack the resources to cope with the infected population.

The Texas city of Laredo made a deal earlier this month with the Biden administration to transport illegal border crossers to Austin, Dallas, and Houston.

“The reason why we don’t do testing is that once you test, there’s an obligation,” Laredo Mayor Pete Saenz, a Democrat, told MyRGV.com in a piece published Aug. 10. “If they’re positive, we’re told that you have to quarantine. We don’t have the infrastructure for that.”

“At this point, we’ve had zero ICU beds in the last seven days,” the mayor told the Rio Grande Valley news outlet, adding:

We’ve had people in overflow, basically waiting for a hospital bed out in the hallways. I think today we had close to 40 just waiting for a room. …

I know some people may say, ‘You’re basically transporting untested people to other cities.’ And the answer is ‘Yes.’ But what alternative do we have here, locally?

Officials in the border city of McAllen, Texas, said that since February, the Border Patrol has released into the city more than 7,000 illegal immigrants who tested positive for the virus.

McAllen officials had to set up a temporary shelter for these migrants in a park in the nearby town of Mission.

“We’re doing something that we’re not equipped to do, that we’re not supposed to do, and that we shouldn’t be doing,” McAllen Mayor Javier Villalobos, a Republican, told TV station KENS 5, a CBS affiliate. “Very frustrated. As an elected official, we’re in charge of water, sewer drainage, police protection, fire protection—not immigration.”

The capacity for the quarantine facility initially was 250, but it went on to house 650, KENS 5 reported as of Aug. 6.

Catholic Charities has provided housing to the illegal immigrant population, and a third party was overwhelmed by the number of illegal aliens they were taking.

4. No ‘Pandemic of Migrants’

Despite all these facts, Dr. Ivan Melendez, who worked in COVID-19 hospital wards and is based in McAllen, told CBS affiliate KHOU-TV: “We do not believe that this is a pandemic of the migrants.”

Melendez said illegal immigrants don’t have a higher rate of coronavirus infection than the general public, and stressed that there was “very little intermingling with our local population as they move forward north.”

“The rate of positivity among the migrants is at or lower than the rates in our local border communities,” he said. “As has been expressed by the medical professionals, this is a pandemic of the unvaccinated.”

The homeland security secretary did not address the vaccination rates of the countries where illegal immigrants originate.

Ries said she finds Mayorkas’ argument unconvincing since illegal immigrants have been housed in hotels and placed on planes and buses for transportation.

“If they have data on that, they need to show it,” Ries said. “We have had a surge in cases. Immigrant or not, the data is lacking.”

Jarrett Stepman contributed to this report.

Have an opinion about this article? To sound off, please email letters@DailySignal.com and we’ll consider publishing your edited remarks in our regular “We Hear You” feature. Remember to include the URL or headline of the article plus your name and town and/or state.

Fred Lucas is chief national affairs correspondent for The Daily Signal and co-host of “The Right Side of History” podcast. Lucas is also the author of “Abuse of Power: Inside The Three-Year Campaign to Impeach Donald Trump.” Send an email to Fred.