Original article (from Sky News UK).  It is difficult to watch/hear the videos & podcast in the original article, but everyone should.  They can not be reproduced in this post.

NewsMax update.  Does anyone have any doubt that President Trump would be delivering on his promise to the Taliban RIGHT NOW?  And, we would be taking our Americans and allies. 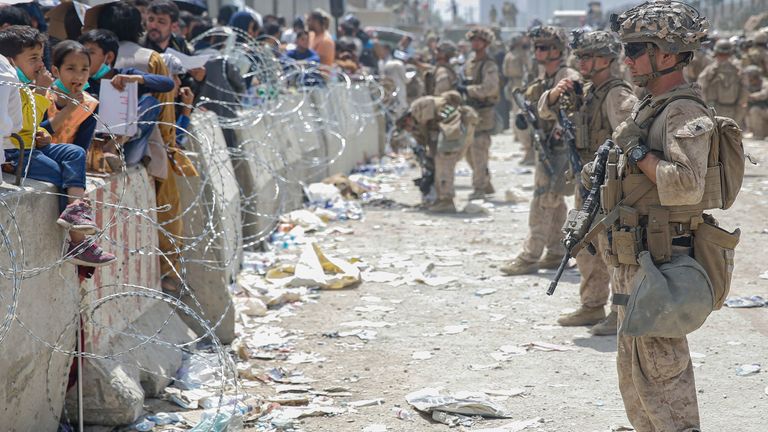 Shadow foreign secretary Lisa Nandy said her office has received reports from “hundreds of people” who cannot reach the Baron Hotel or Hamid Karzai International Airport and “who have been beaten at checkpoints or turned away”.

Labour claims fleeing Afghans, including women and families with children, attempting to leave the country are being shot at, beaten, raped and run over by Taliban fighters.

There have been chaotic scenes outside Kabul’s airport every day this week as desperate crowds of Afghans and Western nationals try to flee the country.

Thousands of desperate people have gathered outside the airport gates and the nearby Baron Hotel, where many British nationals have been sent to be processed.

But many are being prevented from entering by the Taliban, leading to fears they may be left behind when evacuation efforts end.

“My office is currently in touch with hundreds of people who cannot reach the Baron Hotel or Hamid Karzai International Airport who have been beaten at checkpoints or turned away – some with young children,” she writes in a letter to Mr Raab.

“We are in touch with many British nationals and Afghans, particularly women and girls, stranded at the airport perimeter.

“MPs have reported cases to the Foreign, Commonwealth and Development Office (FCDO) of people being shot at, beaten and raped while they wait to be called forward.”

There is a race against time for allied soldiers to get those eligible, including translators, interpreters, and other vulnerable people, out of the country before American soldiers, who are leading the evacuation effort from Kabul airport, are due to leave the country on 31 August.

However, a report in The Times suggested Britain’s last evacuation flight could leave Kabul in just five days’ time under an accelerated timetable for withdrawal from Afghanistan. Ministers were told earlier this week that the last evacuation flight might have to leave next Tuesday before the planned departure of American forces.

Although that data could change as another government source was quoted as saying the Tuesday evacuation date had not yet been formally agreed.

Everything you need to know about the Taliban takeover.

Ms Nandy has implored Mr Raab to act quickly to get people processed and onto evacuation flights.

The UK has committed to taking up to 5,000 Afghan refugees in the first year of a new resettlement scheme, and up to 20,000 in the longer-term.

“With only days to go until 31 August and many, many people in danger of losing their lives I hope we can work together constructively to explore all options that might help prevent further tragedy,” she wrote.

The conciliatory tone in the letter is remarkably different to her calls for Mr Raab to resign this week for remaining on holiday in Crete while Kabul fell last Sunday.

President Joe Biden has hinted that some American soldiers could remain past the end of August deadline.

“If there’s American citizens left, we’re going to stay until we get them all out,” Biden told ABC News.

However, this hasn’t suppressed fears people will be left behind and at risk of harm from the Taliban. 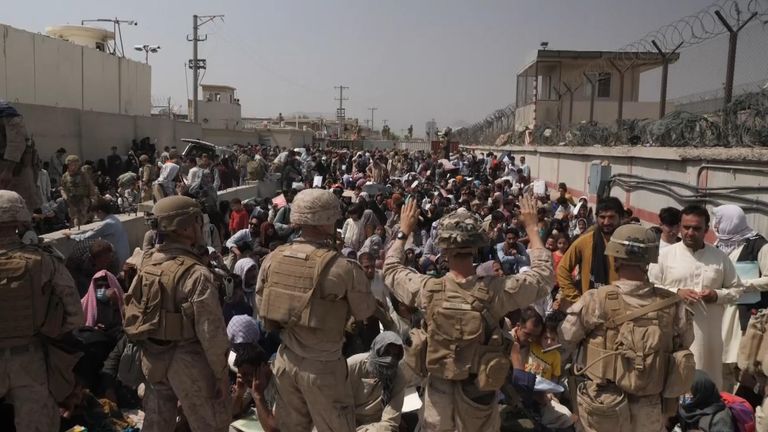 Ms Nandy’s letter continues: “Have discussions now taken place with American partners about the continuing operation at the airport after the US withdrawal?

“Since it is now clear the UK evacuation will not be completed by 31 August, can you prioritise an arrangement with NATO partners to ensure flights can continue to leave?”

She said ministers have heard reports from people eligible for safe passage to the UK who have had their paperwork rejected.

“What assurances can you provide that will be resolved urgently? Afghan nationals who are married to UK citizens are being told by the FCDO that they are not eligible for evacuation. Is this correct?

“We are also in touch with people who have been threatened with reprisals from the Taliban for their support for democracy, education or [partaking in] roles in public life, including MPs. They are told they are ineligible for evacuation. What if any help can be offered?,” she asks.

Ms Nandy also says Labour MPs are extremely worried about the security situation outside the Baron Hotel, close to the airport.

“Colleagues have been in direct telephone contact with British families who are outside the hotel and are blocked from approaching by the Taliban,” she writes.

Hear podcast in original article: Afghanistan: What does the Taliban mean for women?

“A significant number of families with young children report being beaten by Taliban fighters. There are also reports of people being run down in the road, gunshots being fired by Taliban fighters and tear gas being set off by UK and US troops trying to restore order.

“We understand that a makeshift camp has developed outside the hotel, and that British nationals are there alongside thousands of others, in the hope of being allowed to enter the hotel. They are without food or water and security and sanitation are serious concerns.”

For the Liberal Democrats, foreign affairs spokesperson and MP Layla Moran hit out at reports that the last British evacuation flight could be as early as Tuesday.

“Thousands of Afghans have been plunged into desperation by this arbitrarily set and cruel deadline for the last flight out of Kabul,” she said.

“They are depending on us to evacuate them safely and save them from the terror of the Taliban. Britain must not turn its back on them now.”