Original article.  Please see the important video in this article.  Even thought this post is from last month, it was not previously posted on this site.  And, every detail is important and relevant to where we are today.
Randy DeSoto July 27, 2021

For the first time, the state Senate leaders issued a subpoena directly to Dominion Voting Systems, Inc., the company that provided the voting machines used in the county’s November election.

The subpoena issued to the county seeks information and access regarding six matters.

First, “All reports, findings and other documents concerning any breach of the voter registration server, the Maricopa County Recorder’s Office systems, or any other aspect of the Maricopa County elections systems at any time within six months of the November 3, 2020 general election.”

Next, “[a]ll ballot envelopes received in connection” with the election, or digital images of them.

Additionally, “All user names, passwords, pins and/or security keys or tokens required to access, or otherwise relating to, any and all ballot tabulation devices used in connection with the November 3, 2020 general election in Maricopa County.”

“This is specifically for all levels of access, including, but not limited to, administrator access or any level of access required to access and print the configuration of the ICP2 [in circuit programming] devices.”

The state senators also requested all voter registration records and change histories for those records.

Further, they demanded access to the routers used in connection with the election.

Finally, “[a]ll splunk logs, network logs, net flows, or similar data related with systems associated in any way with the administration of the November 3, 2020 general election, for the time period beginning 60 days before the election and ending 90 days after the election.”

BREAKING: The Arizona Senate issues two more subpoenas today. One to the Maricopa Board of Supervisors and one to Dominion. I would not blow these off! pic.twitter.com/0raxVODUS0

BREAKING: The Arizona Senate issues two more subpoenas today. One to the Maricopa Board of Supervisors and one to Dominion. I would not blow these off! pic.twitter.com/0raxVODUS0 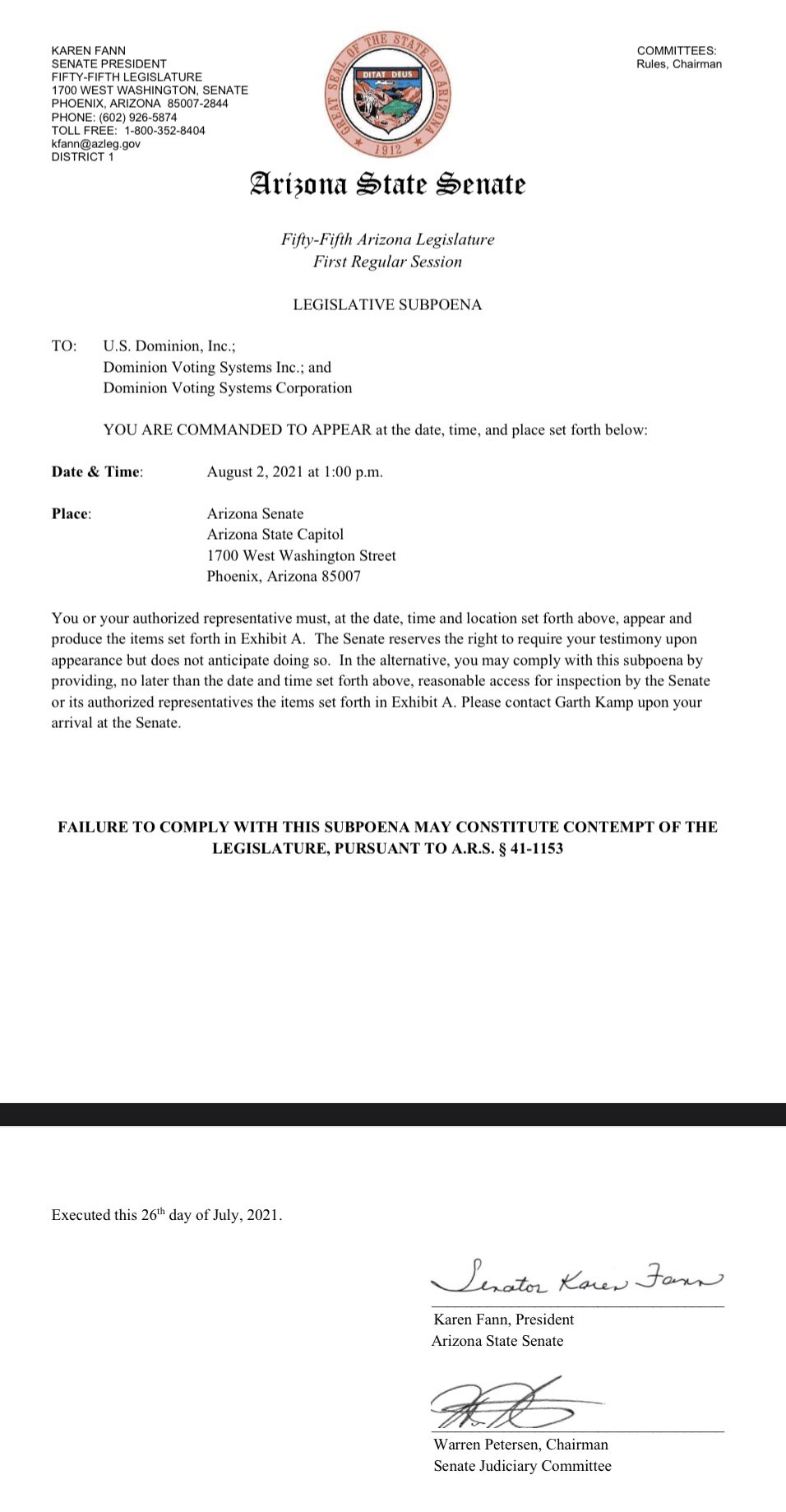 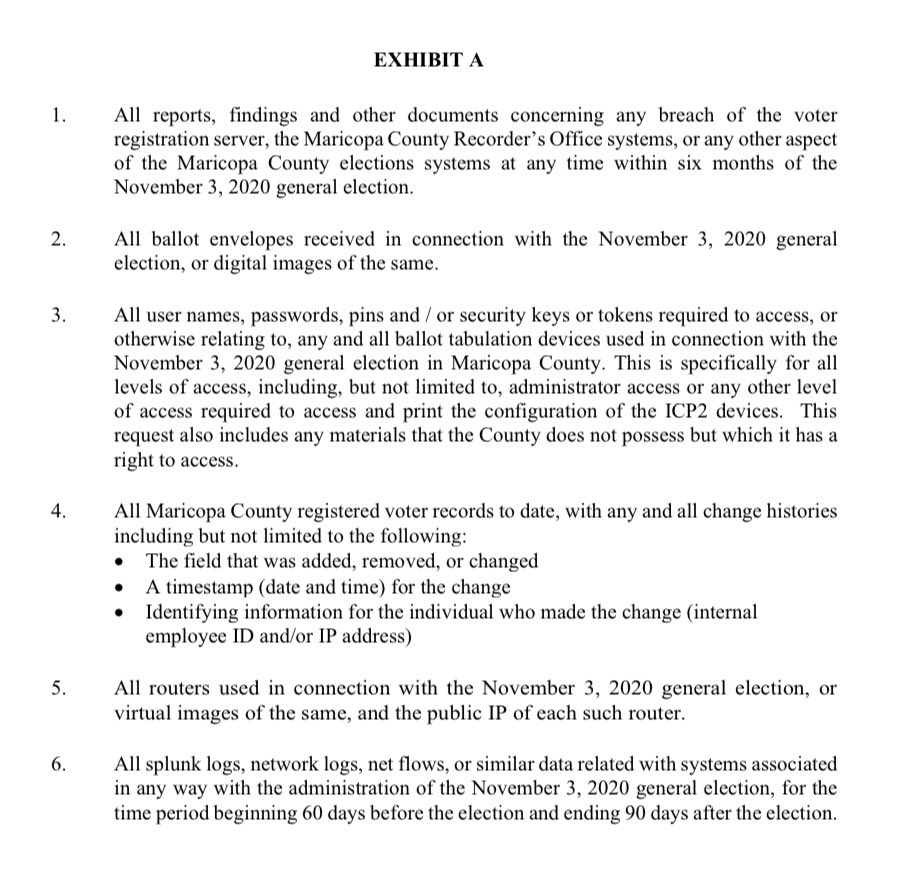 The splunk logs show the activity through the routers and would be a means to determine if anything abnormal happened regarding the vote tabulators and other equipment on or around Election Day.

In May, Dominion refused to turn over the passwords to the auditors, stating, “Releasing Dominion’s intellectual property to an unaccredited, biased, and plainly unreliable actor such as Cyber Ninjas would be reckless, causing irreparable damage to the commercial interests of the company and the election security interests of the country.”

“No company should be compelled to participate in such an irresponsible act,” the company added.

Dominion argued that Cyber Ninjas, the lead firm overseeing the forensic audit, is not accredited.

However, Fann told The Western Journal in an interview last week there are no accredited companies because no full forensic audit has ever been undertaken before.

Maricopa County officials “know full well there are no certified auditors,” she said.

Fann recounted that she in fact called the Federal Election Commission in hopes of finding a list of companies to use and was informed none existed.

Fann noted that auditor Ben Cotton, the founder of CyFIR, LLC, is a certified court expert witness regarding cybersecurity issues.

The state Senate president highlighted one vital piece of information that has emerged from the audit is that Maricopa County election officials do not have access to key passwords used by Dominion.

“Maricopa County doesn’t even have control over their own election system,” Fann said. “Only Dominion has those passwords and they have 24 hour a day access to those computers.”

The auditors testified at a hearing last week that multiple Dominion employees have access to the passwords, which undermines accountability since there is no way of knowing exactly who accessed election equipment in each instance.

Another key finding of the audit revealed at last week’s hearing is that there is reportedly no record of up to 74,000 absentee ballots being mailed that apparently were counted in November’s election.

This would explain why the auditors are seeking the mail-in ballot envelopes or the images of them.

Asked about the 74,000 figure, Fann told The Western Journal the county’s “numbers are not adding up,” and it is not clear if officials are simply withholding information or something else is going on.

Maricopa County Recorder Stephen Richer tweeted following an interview on Fox News’ “Special Report” on Monday that the envelope images have been provided to the Senate, adding his office “can do so again if they lost them.”

Hey @BretBaier, you hit some good points, but you didn’t ask @stephen_richer about the envelope images not being turned over. #AZAudit.

Because we have. And can do so again if they lost them.

However, Petersen tweeted last week Maricopa County had not turned over the envelope images to the audit team.

Why isn’t the media getting answers for these questions raised at the hearing by the auditors?

1. Why were 37,000 queries made on the Election server on a single day in March which churned the logs so the logs from election day could not be seen?

2. Why won’t the County provide images of the envelopes for the mail in ballots?

3. Why won’t the County provide the splunk logs?

4. Why were duplicate ballots missing the serial numbers as required by ARS 16-621 and why were there multiples with the same number?

Former President Donald Trump’s spokeswoman Liz Harrington similarly told Fox News, “You can’t debunk something if you don’t know where it comes from, and Maricopa County admits that they don’t know where the auditors came up with the 74,243. So this needs to be vetted, and this is the exact reason why the canvas needs to continue, and also that the Maricopa County board turns over the ballot images of the envelopes.

“To this day, they’re hiding information, they’re hiding routers, they’re hiding data — what do they have to hide? If this was the most secure election in history, which America knows it was not, certainly they would have no problem handing over those ballot images of the envelopes to make sure a real voter was behind that mail-in ballot. That’s the problem.”

Both the subpoenas to Maricopa County and Dominion Voting Systems set Aug. 2 as the deadline to comply.

Fields Moseley, a spokesman for the Maricopa County Board of Supervisors, told KSAZ-TV that the board and its attorneys will review the subpoena and respond in the coming days.