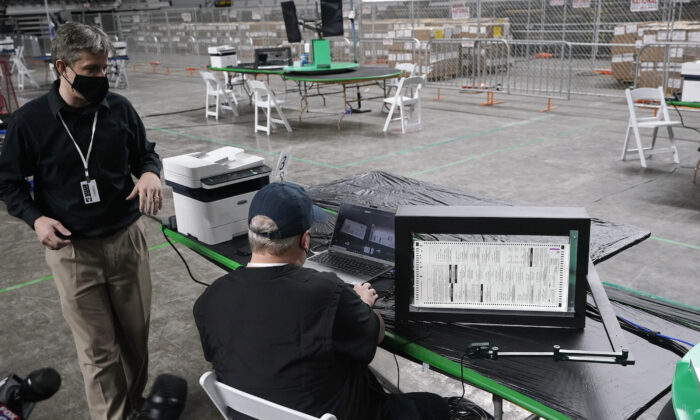 Department of Justice officials on Wednesday alerted states that they’re tracking closely the 2020 election audit taking place in Arizona and proposed audits in several other states.

The new guidance document summarizes the Biden administration’s position on federal law concerning audits, deeming the round of reviews either done, being done, or proposed “unusual” and “exceedingly rare” while highlighting that federal law imposes constraints under which counties and states must comply.

The former, for instance, makes it the duty of election officials to maintain the security and integrity of the records and safeguard their chain of custody, “so that a complete and uncompromised record of federal elections can be reliably accessed and used in federal law enforcement matters,” the document states.

“Where election records leave the control of elections officials, the systems for maintaining the security, integrity, and chain of custody of those records can easily be broken. Moreover, where elections records are no longer under the control of elections officials, this can lead to a significant risk of the records being lost, stolen, altered, compromised, or destroyed. This risk is exacerbated if the election records are given to private actors who have neither experience nor expertise in handling such records and who are unfamiliar with the obligations imposed by federal law,” it adds, in a clear reference to the audit being done in Maricopa County, Arizona.

Violators of the Civil Rights Act face fines of up to $1,000 and a jail sentence of up to one year for each violation.

“The reason we’re issuing this as guidance is to tell jurisdictions, generally, that we are concerned that if they’re going to conduct these audits, so-called audits of the past election, they have to comply with federal law, and warning them that they can’t conduct these audits in a way that is going to intimidate voters,” a DOJ official told reporters in a call about the guidance.

“This document sets down a marker that says the Justice Department is concerned about this and we will be following this closely,” the official added.

Officials noted that Attorney General Merrick Garland last month said the DOJ would focus in part on scrutinizing audits to make sure they comply with federal laws.

Arizona Senate President Karen Fann, who ordered the audit, told The Epoch Times at the time that “Democrats have been trying every avenue they can to stop or discredit this audit.”

“I’m sure this will be one of many avenues they will pursue post audit as well,” Fann, who did not reply to questions on Wednesday, wrote in an email.

Arizona’s attorney general, Republican Mark Brnovich, warned Garland in June that his office would “not tolerate” any attempt to thwart the audit, which is widely opposed by Democrats, including Arizona Secretary of State Katie Hobbs.

The Maricopa County effort is by far the largest post-election review in the nation. Auditors hand tallied the ballots cast last year—nearly 2.1 million, according to county officials—and examined hundreds of machines used to count votes.

Auditors are expected to complete their physical work this week. A final report on what they found is expected to be released next month.

An initial plan to canvass households from which questionable votes were cast was put on hold after Pamela Karlan, a DOJ official, reached out to Fann to express concern about possible voter intimidation. Cyber Ninjas CEO Doug Logan at a hearing this month recommended the canvass happen to clear up worries about some of the ballots auditors reviewed.

The Arizona audit has inspired lawmakers in other states. Pennsylvania Sen. Doug Mastriano, a Republican, recently initiated a review of the 2020 election three counties after visiting the audit, though two of the counties have signaled they will not cooperate. Legislators and election integrity groups in Georgia and Wisconsin are pursuing similar efforts.