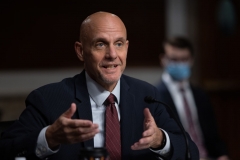 “I think, Maria, we don’t know the answer to that question yet. It’s complicated by the fact that yes, it’s less dangerous in those who are vaccinated, and remember a substantial portion of American adults are vaccinated, but it’s still a deadly virus. I wouldn’t want for us to take foot off pedal with respect to this,” Hahn told Fox News’s “Mornings with Maria Bartiromo.”

“I don’t want to send a message to unvaccinated folks that they shouldn’t get vaccinated, but it is true that in infectious diseases – viruses in particular – that the more the virus mutates with time, there is a potential for the virus to become less virulent. We just don’t know the answer to that as these mutations arise,” he said.

The FDA on Friday authorized a third booster shot for people who are immunocompromised and received the mRNA vaccines by Pfizer or Moderna, Reuters reported.

Hahn said it was “a good decision” that was “based on recently accumulated data around the antibody or immune response in immunocompromised people who have a weakened immune system as you mentioned – cancer patients, transplant patients, et cetera, so I think it’s a good decision.”

“It tells us a lot about where the science and data are heading, and I do believe that we with this pre-stage is a decision about broader application of booster immunizations. It’s not that uncommon, right. Tetanus shots have boosters, and I think we always had the expectation that this might be the case,” the former FDA commissioner said.

“Now where it begins and where it ends and who will be eligible for it, the science and the data behind the immune response and how long it will last will have to guide that decision making,” he said.

On breakthrough infections among people who have been vaccinated, Hahn said he’s been “following this information and looking at both the peer-reviewed, non-peer-reviewed data, and I think I am pretty confident saying to you that information we have right now the vaccine, if you are unvaccinated, you are 25 times more likely to be admitted to the hospital with COVID, or to be sick or die from COVID.

“Now that being said, there are data to suggest that the immune response wanes with time, and we know that’s true with other vaccines and that really brings us to current discussion around boosters or potentially a new vaccine for the variants, so to me the bottom line is there is still a very strong medical rationale, scientific rationale for getting the vaccine, because it does protect,” Hahn said.

Hahn said there’s no reason to believe we won’t see continued mutations “in the characteristics virus like we’ve seen with the Delta, and now people describing something called the Lambda virus.”

“So they’re all variants of the original COVID-19 virus, but what happens is that the more we have a significant proportion of unvaccinated people, we’re going to continue to see, many people as a reservoir if you will for this virus, and the virus is going to have an opportunity to mutate,” he said.

“Now that being said, as I mentioned if you’re vaccinated, you’re protected for the most part against severe disease and hospitalization and death, but we are going to continue to see this until we get the vaccination rates up, and that means worldwide, not just in the United States,” he added.

Recent data from the FDA and CDC shows vaccinated people can still spread COVID. Hahn said the revelation took everyone by surprise.

“Those are new data that the CDC just published about two weeks ago, a week and a half ago, and I think all of us were a little surprised but it suggests that virus can still be present in a person who is vaccinated, although it seems to disappear very quickly and much more quickly than in unvaccinated individuals.

But Maria, I think the point — and I believe the American people understand this, when you are a doctor facing with someone sick, you’re going to make the best decision you can with the information you have but that information’s going to be updated, and that’s happening now, and I think what we have to do is what we need from government, public health officials, academics, doctors is transparency about what it shows.

I think American people want to hear the truth. And we should not be afraid of telling them at some point may or may not know answer to a question, but here is where we think information and data are headed.

When asked whether Pfizer is failing at a higher rate than Moderna, Hahn said, “So there was this initial report that looked at, and again, you’ve pointed out that it’s not peer-reviewed – looking and they matched folks with different age-groups, et cetera, and made the observation that perhaps the Pfizer vaccine wasn’t as effective as the Moderna vaccine, but this was one paper in one specific set of population of people who were vaccinated.

“We don’t know the answer to that question, and Maria, it’s not a competition. What we have to do is we have to gather as much data as possible, but I think let’s go back to the original point, Maria, which is that even in about that study 75, 85% of people were protected with the vaccine, from severe disease and hospitalization, really need to focus on that point and drill that home,” he said.