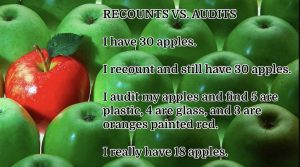 The political response to unprecedented mistrust of official election counts attempts to either mitigate the electoral impact of constituent sentiment or to fix the cause of it. These varied efforts include legislative hearings, reviews of laws and process, reformative legislation, and audits that range from superficial recounts to exacting forensic analysis.

In New Hampshire, a localized audit was conducted in the city of Windham and included looking inside the machines and looking closely at the ballots, but at its completion was being conducted by one man acting alone.

In Michigan, the Senate Oversight Committee conducted an investigation. It produced a report on the 2020 General election, but State Representative Daire Rendon said it was concluded “without examining appropriate evidence, expert reports or requesting testimony from qualified experts.”

In Georgia, a ‘risk limiting’ or partial sampling audit of absentee ballots has been conducted by the Georgia Bureau of Investigations. Still, gubernatorial candidate Dr. Kandiss Taylor is pushing for a full forensic audit. She says that the partial sampling is insufficient even if it were done correctly – that the official reporting on the partial audit is missing ballots that should have been checked.

A statement from Donald Trump said a “full forensic investigation” is needed in Wisconsin, where State Senator Chris Kapenga called the auditor in charge and requested an unspecified “forensic component” to the ongoing investigations by the Joint Legislative Audit Committee.

In Pennsylvania, the state legislature conducted a “Comprehensive Review” of election laws soon after the election. The resulting report drew on witness testimony that identified “systemic problems” and “legislative fixes” for future elections, but grassroots activists and groups called for a more complete second look at the 2020 election results. Audit the Vote PA relentlessly petitioned for recounts as well as signature verification for mail-in ballots and an independent examination of all electronic voting machines. Until recently, State Senator Doug Mastriano called on three counties to provide information that would be needed for what he calls a “forensic investigation.”

This came after Mastriano had visited the Maricopa County, Arizona audit conducted by Cyber Ninas. Donald Trump has said those who have visited the Maricopa audit do so to “learn the best practices for conducting a full Forensic Audit.” Mastriano said it was “very secure” and “a model for any audit in any nation or the world.” In his press release about his visit, he described Cyber Ninja’s operation as having stages that audited registration, votes cast, vote count, tally, voting systems, and reported results.

Pennsylvania Senator Chris Dush, who protected classified information for the Air National Guard, toured the audit floor with Mastriano and said, “I’ve never seen anything quite like it.” He described the chain of custody and preservation of evidence by saying, “From the time they received this information from the County to the time they give it back. They are going to be able to know who touched these ballots every step of the way.”

“I was completely blown away by the detail of the examination of the paper, of the ballot, of the marks, of the counting of those ballots. The cameras all over the place for security. I’ve never seen anything like this before. This is exactly what I hope can come to Georgi. We’re going to have a forensic audit in Georgia, I hope it’s at this magnitude.“

“I could verify with my own two eyes, this audit is being carried out with the greatest of care and by true professionals who know what they are doing and care about our democratic processes. The transparency here has been remarkable. Every citizen can visit the video feed and witness what’s going on. The best practices being developed here can be used for future audits, such as those being considered in Wisconsin, Pennsylvania, Georgia, and other states.“

Because of all this, the Maricopa audit—with its assembly line of microscopes, counting tables, and aggregation tables—has been called the Gold Standard of audits. However, a report from a team led by physicist and mathematician John Droz Jr. titled ‘Post-Election Audits: Verifying Election Integrity’ says Maricopa’s audit is “only about 3/4 of a Full Forensic Audit.”

An article by Stu Cvrk called ‘Post-Election Audits: What You Don’t Know About Them and Why They Should Be Done’ looks at the Droz team report, whose website earned Patrick Byrne’s “highest recommendation“ for election integrity information. He explains that election results can be certified by the state prior to any investigation into irregularities, machines, or processes—and that many post-election efforts involve only recounting, canvassing, and certification. Such limited attempts to confirm the count inevitably miss problems with the machines, voters, ballots, or counting process such as one vote per voter and that all/only legitimate ballots were counted.

Cvrk concludes that, since the full story can only be found “by a full forensic audit of the voter, machine, and ballot process,” we must ask, “How can we possibly believe that our elections are secure and that there is no possibility of widespread fraud if election FFAs have never been performed?”

This is in agreement with the Droz team report, which states, “Real science-based (forensic) audits are the ONLY way we can verify whether we have election integrity. Since no state, county or precinct has ever had a Full Forensic Audit (FFA) — and less than a handful of counties have had a Partial Forensic Audit — it goes without saying that we have no legitimate basis for believing that the US election system is honest and accurate.”

The Droz team report described partial or ‘risk-limiting audit’ to be “better than a simple machine recount” but far short of a Full Forensic Audit. It says, “the name is likely purposefully chosen to mislead citizens and legislators to believe [it] provides more election integrity assurance than it actually does,” saying it would be more accurately called a “Minimal Election Audit.”

The Droz team report distinguishes between what “the realities are” and what it calls “the election palliative pablum we are being spoon-fed” as it details theoretical incentives at play among those who are against detailed audits:

“We expect that those who profit from the current system’s failings will continue to aggressively push back against meaningful (forensic) audits. Since they will not likely acknowledge that their objections are self-serving, they will almost certainly resort to such deceptive retorts as ‘these audits are a waste of time and money.’ Nothing could be further from the truth. Our rights and freedoms are inextricably tied to our ability as citizens to freely elect our representatives. If we allow bad actors and errors to undermine this, the fabric of our society will be fatally torn.“

“a) What sense does it make to have national elections based on 50 sets of procedures? None.

b) Who is assuring that these procedures are rigorously adhered to? No one.

c) What meaningful penalties are there when these procedures are not followed? None.”

The report’s appendices include suggested checklists for forensic Voter, Machine, and Process audits that include 52 points and examples for each, followed by numerous links to sample reports it considers exemplary.

“America has an understanding completely of what a forensic audit is now when it comes to elections, and it’s exactly what we did in Arizona. You look at everything, and by everything, it means you’re not only looking at the machines and the hard drives as you did in the past, but you look at every single ballot cast in every single category.”