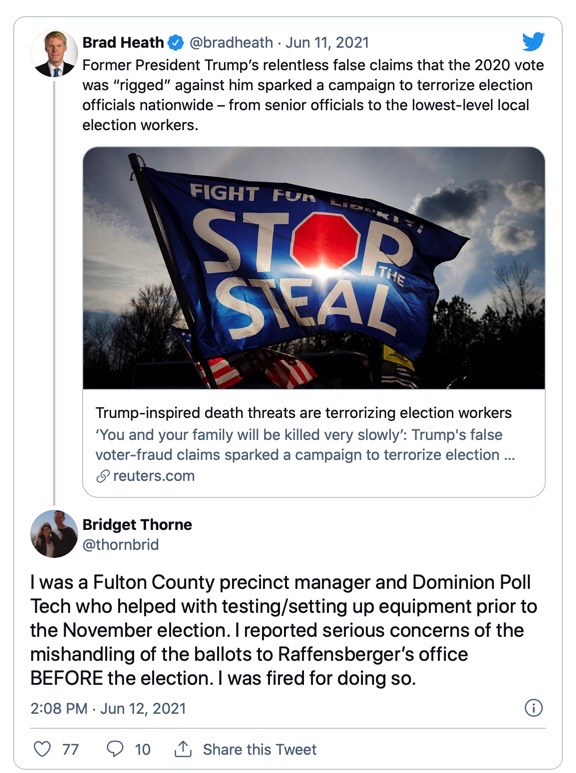 Evidence was presented at the Fulton County Board of Commissioners (BOC) hearing on June 16, indicating that Stacey Abrams “financed the main contractor used in Fulton County elections during the Nov 3rd poll and the Jan 5th U.S. Senate runoff,” according to CDMedia.

Thorne had helped set up voting equipment prior to the November election. She claims she was fired for speaking up before the election about the mishandling of ballots. Her affidavit can be found here.

In the June 16 meeting, Thorne told the BOC that she had “repeatedly tried to work early elections but Happy Faces doesn’t seem to respond.” She contacted local officials to see how she could work as a poll tech, but they redirected her to Happy Faces. She also described how “SoS was threatening Fulton elections with huge fines if they had another disastrous election.”

The video below is a clip of Thorne commenting on Abrams’ involvement with Happy Faces at the BOC meeting.

Thorne also explained that when the Secretary of State (SoS) offered staffing substitutes for warehouse workers who had been quarantined in the fall, “Fulton County declined their offer and brought in unqualified, untrained, hundred percent minority Happy Face employees.” Thorne quoted a 2014 Atlanta Journal-Constitution (AJC) article regarding a company Abrams founded called NOWaccount, a company that “secures government contracts.” Stacey Abrams, according to Thorne:

“Owns 16 percent [of NOWaccount]…NOWaccount is registered as the only secured party provider for Happy Faces. NOWaccount provides the line of credit…with the purse strings connection of Stacey Abrams to Happy Faces, you must ask does she have influence over who gets hired to work for our elections. Can she or her activist groups also recommend employees? With Happy Faces working one hundred percent early voting, ballot adjudication, absentee ballot processing, warehouse, dropbox, signature verification—they are basically running our elections. Shouldn’t we know who they are recruiting? Shouldn’t we know who they are? Could an activist group have a special connection and ability to work our election while veteran poll clerks like me are shut out?”

The following document addresses her association with the founding of NOWaccount which describes the charitable organization as having:

“Pioneered a new way for small businesses to access the money owed to them for providing a service at a time when credit for small businesses was especially difficult to find. NOWaccount buys invoices from qualified small businesses so they can get paid right away, rather than wait the sometimes 30 or 60 days it takes to get paid by a customer with an outstanding invoice. NOWaccount works like a credit card but costs less to the business. With the NOWaccount payment system, companies invoice their customers as usual, and the full payment is deposited into the companies’ bank account within 5 business days, minus a flat, one-time service fee of 3%. The small business doesn’t incur any debt. You can read about how NOWaccount works here http://nowaccount.com/”

Abrams, Lara Hodgson, and “John Hayes in 2010 [started] NOWaccount, a company that provides a payment system to small businesses, improving their cash flow so they can grow and thrive.” Abrams and her partners took advantage of the Obama administration’s “Small Business Jobs Act of 2010, which included the State Small Business Credit Initiative”and “applied for this federal program to help small businesses across the country get access to capital after the recession so they could stay open, grow, and create jobs,”according to the statement released by Abrams on the project.

At the time, Abrams said it was not a conflict of interest to form the company during her tenure as House Democratic Leader. The organization has partnered with the Georgia Chamber of Commerce, among other organizations.

Harvard Business School wrote an abstract on the company in 2013 with a revised edition here.

Recently, Abrams was appointed as one of seven new board members added to the Marguerite Casey Foundation, according to a May 3 announcement. The statement from the Foundation referencing her addition to the board reads:

“Each new board member will bring a fresh perspective on fulfilling the core mission of the foundation—creating greater freedom for leaders who can increase community power and help bring about a truly representative economy.”

Rashad Robinson, President of Color of Change, describes the Foundation below:

“Marguerite Casey Foundation has both a deep commitment to racial justice as well as a demonstrated commitment to building organizing capacity within the movement. MCF understands that racial justice is a transformative force in society, mobilizing people at every level of society to bring about the policy and culture changes that will create a more just society for everyone.”

Abrams is also the founder of Fair Fight. According to its website, “We promote fair elections around the country, encourage voter participation in elections, and educate voters about elections and their voting rights. Voter suppression, particularly of voters of color and young voters, is a scourge our country faces in states across the nation.”

Transcripts on the Nigerian Connection

In March, transcripts were provided to CDMedia indicating a “Nigerian Connection” to the Fulton County elections. CDMedia reported:

“[D]eposition transcripts of a Nigerian national who was selected by Dominion Voting Systems to be the Fulton County ‘County Technician’ during the 2020 U.S. general election. The individual was hired by Dominion in December of 2019 after being in the United States for a few years.”

This may suggest that “highly partisan Democrats controlled the Fulton County Election,”as reported by CDMedia.

Barron indicated that the average election requires about 3,000 workers. Civic (citizens) and paid county people fill 2,600 of those positions. 87% of those hired by Happy Faces have been Fulton County residents, according to Barron. He also said temporary workers are in supervisory positions in the early voting locations and are on assignment for 3 to 5 weeks.

One advantage of hiring temporary help is the ease of termination if they underperform, according to Barron. He also stated that the hiring of permanent employees to equal the workload performed by the temporary employees is much more costly to the county—if figured on an annualized basis.

Commissioner Liz Haussman questioned the cost of the 400 temporary employees, pointing out, “[They] cost as much or more than the 2600 civic and county employees.” Barron remarked that election day workers are paid a flat fee, “anywhere from $225/day to $375/day.”

During the exchange (4:04:32 timestamp), Hausman challenges “the accounting” for the cost for hiring temporary help that totals over $7 million for 400 temporary workers for 3-5 weeks—when election workers for election day are each paid $225-$375/day.

In the June 2 hearing, she also mentioned that Fulton County residents have called her repeatedly to say they have tried to apply to work for Happy Faces without success—meaning Happy Faces never called them back. This confirms the public comments made by Thorne in the June 16 meeting. Barron stated that Happy Faces is responsible for its hiring practices. Notably, Hausman also brought up the security breach at the warehouse in May because of calls from many concerned citizens.

Thirteen percent of the staffing for elections is populated by temporary staff. Barron stated in the meeting that Happy Faces is extremely efficient and has maintained a contract with the State of Georgia for 20 years. Their contract is set to expire at the end of June. The documentation also shows an “initial term of contract is July 1, 2017, to June 30, 2019, with three (3) one (1) year renewal options.”

The Happy Faces contract has already been renewed twice for Fulton County—once in July 2019 and once in July 2020. The information sheet presented at the June 2 meeting on Happy Faces Personnel Group, Inc. can be found here.

Notably, at the same June 2 meeting, grant funds were discussed as having been awarded to purchase additional Dominion Voting Systems equipment for upcoming elections. Georgia’s 112-page Dominion contract is here.

The documentation for the June 16 County Commissioners meeting includes a “Master Solution Purchase and Services Agreement for Statewide Voting System with Dominion Voting System (Denver, CO) in an amount not to exceed $532,462.00 to purchase additional voting equipment for training purposes” is also listed.

Barron requested a continuation of the Happy Faces contract at the June 2 meeting. However, the motion to extend the contract failed both in May and on June 2.

The requested 2021 spending authority for the “not to exceed” $7,744,880 contract for hourly services can be found here. It would “include payroll for staff currently working on post-2020-2021 election reconciliations and open record requests, the 2021 special countywide and 13 municipal general elections, seven runoffs, and any unexpected special district or countywide special election prior to the November 2021 elections.” According to the same schedule, Dominion staff was allocated $50,000.

The June 16 Board of Commissioners meeting part 2 revealed that the Center for Tech and Civic Life (CTCL) is among those to fund election-related grants. Barron was asked if it was ‘the Zuckerberg grant” and he responded by saying that it was CTCL. Barron stated that CTCL gets funding from several places and was unsure of the source of the funding for the grants. Still, several of the contracts associated with elections had only one bidder for the contract—or what is called in the documents “a contract without competition.” This information is referenced in the day’s agenda.

Capitalresearch.org  researched CTCL grants and found some of the “known grants to Georgia counties.” The spreadsheet shows counties, like Fulton county, with grant spending per capita and voting comparisons. It has been updated as of June 2021. Fulton County apparently received a $6 million grant from CTCL.

On June 16, the commissioners agreed to hold back discussion of the vote on the Happy Faces contract request by Barron. It appears the contract has not yet been renewed according to the meeting since there has been no affirmative vote on the request as of this writing. There was also a June 4 BOC teleconference meeting, but it was called a special meeting and no video is available.

Two lawsuits filed to push for a forensic audit of the ballots in Fulton County are on hold per reporting by UncoverDC. The next hearing has been scheduled for June 21.

Due to the latest information being reported in Fulton County, Georgia Secretary of State Brad Raffensberger is now all-in for the audit, commenting on Twitter on the dropboxtransfer documents and chain of custody issues in Fulton County.