Mail-In ballots are returned back to the printer, according to a News15 story about the ballot printing company.  The printer collects a digital image of the signature before the ballots go to the county to be tabulated.  Should we be concerned about that?

There are almost 2.1 million ballots counted in Maricopa county, the largest republican county in the United States, that somehow, during the wee hours of the morning after election day spiked for a democrat lead in the Presidential, senate and sheriff races.  Maricopa County remained republican for most other races, a very curious phenomenon.

Who validates signatures for so many mailed ballots?   Did the process change this year to accommodate the massive increase?

According to    Arizona ABC News15 Story      the printer does the signature validation and is taking digital images returned ballot envelopes. 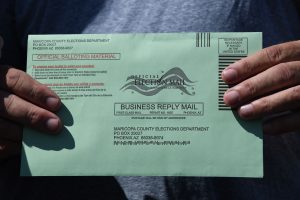 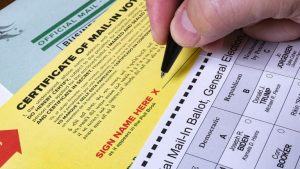 Is it common practice for a private company to get permission to collect a digital file of every voter’s signature in Maricopa county?  What security measures were considered in this decision?   Should this be disclosed to voters BEFORE they participate in mail in voting?

If a ballot signature does not match the registration, the ballot is put in limbo, waiting for the voter to ‘cure’ his ballot, or confirm his identify.  Many people are unaware of this possibility or how to find out if their vote counted.  Because the election was so close, volunteers went out to help raise awareness of voters whose votes had been rejected.   In doing this, they learned a lot about how badly the voter rolls need to be cleaned up.

Questions posted on Facebook referred folks to their  Maricopa County Voter Education Report.  But that report produced more questions than answers.  Simple math indicates over 200K mailed out ballots that are unaccounted for.  And with such a high number of adjudicated ballots, better understanding of procedures for updating voter rolls and oversight of signature verification is warranted.

Opinions expressed by columnists do not necessarily represent the views of crimeofthecentury2020.com.  We strive to be fair and accurate. If you see something that may not look right, please contact us.