A conservative watchdog group filed a Freedom of Information Act lawsuit Tuesday for records that could shed light on an incident in which President Joe Biden’s nominee to lead the Bureau of Alcohol, Tobacco, Firearms and Explosives allegedly made a derogatory comment about black agents.

The pro-gun control nominee, David Chipman, told Sen. Ted Cruz in writing that he received two Equal Employment Opportunity Commission (EEOC) complaints during his 15 years as a manager with the ATF. Chipman said the complaints were “resolved without any finding of discrimination and no disciplinary action was taken against me.”

Chipman added that his ATF personnel file is under the control of the federal government, but he did not answer when asked if he would be willing to provide his file to the Senate Judiciary Committee. The ATF declined to comment to the DCNF.

Tom Jones, the president of the American Accountability Foundation, said he filed two FOIA requests with the ATF in May requesting records related to any complaints and disciplinary measures taken against Chipman during his 25-year tenure with the agency. The AAF’s lawsuit said the ATF failed to produce the records in the timeframe allotted by the law, despite Chipman’s acknowledgment in his written statement to Cruz that the federal government has control of his personnel file.

Jones said AAF’s FOIA lawsuit could produce records related to an incident around 2007 in which Chipman allegedly made a derogatory comment about black ATF agents performing too well on a selection exam.

Jones told the Daily Caller News Foundation he spoke with a former ATF agent who personally witnessed Chipman making the derogatory comment after reviewing results for candidates who had passed an assessment to become an assistant special agent in charge.

Jones said the former ATF agent recalled Chipman saying: “Wow, there were an unusually large number of African American agents that passed the exam this time. They must have been cheating.”

According to Jones, the former ATF agent was “incensed” upon hearing Chipman’s comment and reported the incident to the EEOC.

Chipman was the assistant special agent in charge of the Detroit Field Division at the time he allegedly made the derogatory comment.

The DCNF’s attempts to reach the agent who reported Chipman’s comments to the EEOC were unsuccessful.

Another former ATF agent who worked in the Detroit office at the time told the DCNF that Chipman’s alleged comments about African Americans “spread like wildfire at the agency.”

The former Detroit-based ATF agent, who wished to remain anonymous out of fear of retaliation, did not personally witness Chipman making the comment, but recalled colleagues talking about how Chipman “made this remark that all the African Americans must be cheating because there’s no way they could get these scores.”

“He made this remark in front of a bunch of witnesses,” the former Detroit-based ATF agent said. “It spread like wildfire at the agency. It got tremendous blowback, as it should. Here you have a middle manager saying something like that with absolutely no proof.”

It’s unclear how the EEOC resolved the matter.

Chipman told Cruz in writing he had never received formal or informal counseling as a result of allegations of inappropriate or unlawful behavior during his time with ATF. 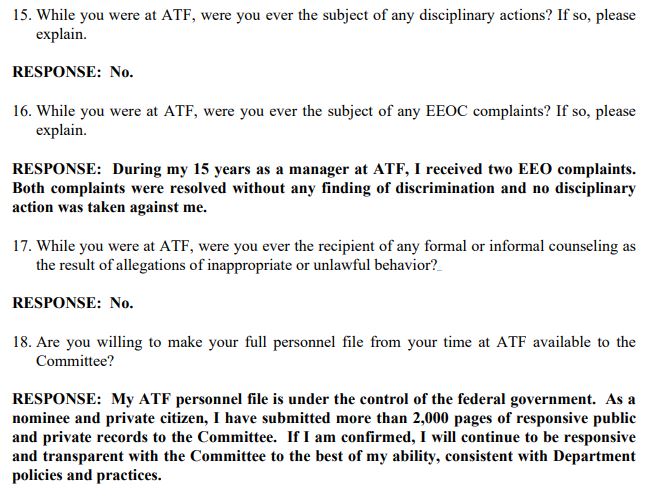 Jones, who has 13 years of experience vetting political nominees as a former Senate staffer, said Chipman’s apparent unwillingness to provide his personnel records shouldn’t be overlooked.

“Anything short of, ‘sure, what do I need to do to turn over my personnel record,’ should be a big red flag for folks,” Jones said.

Republican members of the committee grilled Chipman during his confirmation hearing in May over his past comments in support of restricting gun rights and his recent work with the pro-gun control group Everytown for Gun Safety.

GOP Sen. Mike Lee of Utah ripped into Chipman during the hearing for his “troubling” and “flippant” comments towards legal gun owners during a Reddit “Ask Me Anything” in September 2019.

“While at ATF I conducted studies involving people who failed background checks to determine how many later committed crimes with a gun – many did. This is a perfect opportunity to arrest people before committing crimes rather than responding after the fact,” Chipman said during the Reddit event.

Chipman said during his hearing that his prior comments on arresting law-abiding gun owners were a mistake, according to Fox News.

Republican Sen. Susan Collins of Maine announced Monday she will vote against Chipman’s nomination, calling him an “unusually divisive pick for this important position.”

“In particular, I am concerned that his confirmation would do significant damage to the collaborative working relationship that must exist between ATF, the firearms industry, sportsmen and women, and other law-abiding gun owners exercising their Second Amendment rights,” Collins said in a statement.

The White House did not immediately return requests for comment.