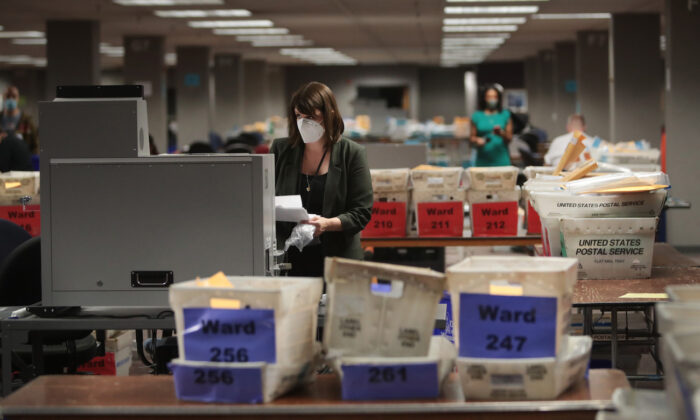 The leader of the Wisconsin Assembly’s elections committee on Friday issued subpoenas demanding materials from two counties related to the 2020 election.

Republican state Rep. Janel Brandtjen said the subpoenas to Milwaukee and Brown counties are a part of a “top-to-bottom investigation of the 2020 Presidential General Election,” which she said aligns with a resolution authorizing an investigation into the election that the Wisconsin state Assembly adopted in March.

“As the Chair of the Assembly Committee of Campaigns and Elections, I am issuing these subpoenas as the first step towards a full, cyber-forensic audit of tabulators and inspection of the physical ballots from the November 2020 fall election,” she said in a statement on Friday.

“Legislators have been hearing from thousands of disgruntled constituents regarding their concerns with the November 2020 election,” Brandtjen noted. “From outside money pouring into Democrat-controlled communities, to individuals engaging in questionable activities; from improper guidance given to clerks from the Wisconsin Elections Commission, to clerks illegally prompting voters to declare themselves ‘indefinitely confined.’ The list goes on and on.”

The subpoenas demand that by Sept. 7, the respective county clerks must submit election materials to the committee. The materials include all physical, mail-in, and provisional ballots cast in the election, as well as all tabulation equipment and software, forensic images of all election equipment, audit trail logs, IP addresses, and much more.

The subpoenas come amid two ongoing investigations into the 2020 election in Wisconsin, including one being conducted by the Wisconsin Legislative Audit Bureau that was ordered in February. The other investigation was authorized by Wisconsin state Assembly Speaker Robin Vos. Both probes are expected to be finished by the fall, although the timeline is not confirmed.

“[M]any constituents have raised objections to it due to the length of time it has taken and the lack of specifics, as it is open-ended,” Brandtjen said, referring to the audit led by the Legislative Audit Bureau.

She said that while she “sincerely welcome[s] and applaud[s]” the two investigations, “the people of Wisconsin demand and deserve a transparent, full, cyber-forensic audit as described in the subpoenas.

“The clock is ticking as the 2022 elections will commence in just a matter of months,” she added.

Prior Calls for More Expanded Investigation

Brandtjen and another Republican state representative previously said they wanted the audit being done in the state to be expanded into probes similar to that being done in Arizona, after they traveled to Maricopa County in June to observe the process.

In July, another Republican state representative, Timothy Ramthun, called for “a more comprehensive audit” following alleged election irregularities revealed in Arizona and Georgia. He said in a statement on Friday that he is in “complete support” of Brandtjen’s subpoenas.

“This is a huge step in the right direction towards a full cyber-forensic audit. This audit is a matter that we cannot wait any longer to address,” he said. “I am thrilled to see this process moving forward. Based on the massive amount of contacts my office has received from all across Wisconsin, it is clear the people we represent demand and deserve this. Our state is finally beginning down the path toward the truth and transparency.”

The Epoch Times has reached out to Vos’ office for comment. Vos’ spokeswoman didn’t reply to messages from The Associated Press on Friday.

Vos previously questioned the value of further probes into the election by Brandtjen, saying on July 27, “As far as her launching her own investigation, I don’t know what that would prove.”

A memo issued in June by the Wisconsin Legislative Council said that only Vos has the power to issue subpoenas.

In July, Vos confirmed he had designated a “special counsel” to his investigation. Retired Wisconsin Supreme Court Justice Michael Gableman was given “authority and independence” to “hire more full-time investigators who will work at his direction.”

Vos had informally signaled he would appoint Gableman in June, just a day after President Donald Trump accused Vos and other state Republican leaders of “working hard to cover up election corruption, in Wisconsin” rather than carrying out a legitimate probe.

“They are actively trying to prevent a Forensic Audit of the election results,” Trump said in a statement at the time.

Wisconsin election results of the 2020 election showed that Joe Biden won the state by about 20,000 votes over Trump.

Mimi Nguyen Ly
REPORTER
Mimi Nguyen Ly is a reporter based in Australia. She covers world news with a focus on U.S. news. Contact her at mimi.nl@epochtimes.com.
MimiNguyenLy
**  End  **