If we knock on your door we will a few general questions of every voter registered at that address.  Your participation is completely voluntary and appreciated!  We ask

We also give you an opportunity to ask us questions or share your concerns.  About half of the addresses we visit have extra voters registered.  We call these Phantom Voters.  Some phantoms will get ballots, and some are voting (with or without a ballot).  Most often it comes as a surprise to the current resident.  In every case we document the  issue and any others the current residents wants to report.  Check out our findings after the first 3000 addresses.

These are the experiences of our canvassers.  Election Integrity warriors numbering in the thousands.  We are everyday people, young and old, working and retired, who care about election integrity.  One thing we all have in common is our concern the main stream or social media is not being honest.  Some people may not be able to handle the truth, or some folks may be happy with the election result however it was achieved.  But most of us want to know our vote mattered, and counting was fair.  We are a free nation and collectively picking our leaders is our fundamental right.

These are the stories of Election Integrity grass roots canvassers.  We are foot-soldiers going door to door looking for an explanation for the 2020 general election.  This is our experience, our truth.

Lawrence is a long time precinct committeeman in Tempe.  He tells us of one affidavit documenting a woman who has been getting ballots at her house for someone for a decade. Every year she sends them back to the recorder marked Return to Sender, except for this last election.  She did not return the 2020 general election ballot for the Phantom voter at her address.   Somehow, without being in possession of the physical ballot a vote was tabulated for that name.  What will the county do about it?  How many of these phantoms are voting?

Barb’s Story, Just One of Many Addresses Visited! 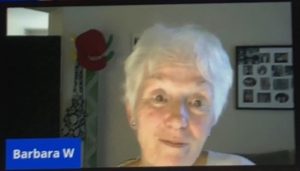 Barb is a dedicated canvasser and goes out often with other retired women like her.  They enjoy visiting other voters to verify the voter rolls and give folks a chance to share concerns.

“One house I went to had one registered voter, a woman who got 15 extra ballots.  She recognized only one of those extra ballots, and it was her father who had passed away in 2018.  I asked if she still had them and she said she shredded them all.”

Early after the election many folks knew something smelled 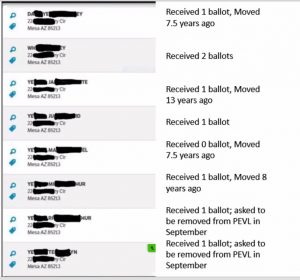 funny.  President Trump had been holding huge rallies drawing crowds of thousands.  There were big boat and car rallies nationwide with flags, banners and signs.  The election was lost in AZ by less than eleven thousand votes.  Hundreds of supporters went out to find votes that were in limbo, uncounted because of a signature mismatch.

One house visited was in Youngtown.  An elderly woman who lived alone was surprised to learn that she had 14 other  people registered to vote at her address, and one had voted.  She knew the young man we were looking for.  He was her neighbor, a friend of the family but he had never lived at her house.  Another address had 15 registered voters and there were two signatures waiting to be counted (we think the walk lists stopped at 15 during those early days).  We thought it was a house but when we got there it turned out to be an apartment.  The leasing agent said she returned any ballot that did not have an apartment number as undeliverable.  But two had been voted!   All this was before we had any indication that Phantom voters existed. 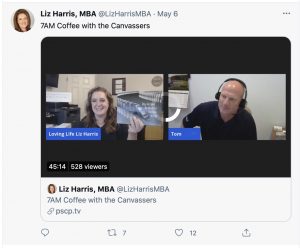 One of the first things Tom brought up about his canvassing experiences was the names on his walk list called ‘Unregistered Voter’.   This phenomenon has yet to be explained completely, and may turn out to be just a way to keep track of potential new voters.  But it keeps showing up on walk lists.  As we learn more about the records we investigate we will update this page.

Duplicate voters are a much larger issue.  We find a lot more duplicates in the walk lists.  Most do not have a Date of Birth field, which should make that registration invalid.  While we usually see only one or two duplicates at an address, there can be many, many more.

Phantom Voters can also be people who once lived at that address but have since moved.  Or they have passed away.  It is very difficult to get the county to remove invalid voters from the database, and that may be why so many extra ballots get mailed out.  Canvassers are out there helping us all learn why it is so important to audit the voter registration database and keep the records up to date.  The next step is to get the county to remove invalid records before every election.