Since December, we’ve canvassed Arizona, and it is Liz’s first report that was the key to the Senate calling for a full forensic audit. We had high hopes of what would be the end results; it produced everything and more!

Some of the key things to understand, Never did we expect the physical count of the ballots to be different. It would have been nice to have such an easily identified problem to fix. However, you can have 100 one-dollar bills, and it will always equal $100.00!

The high points are the following, but do not stop on the first point as ALL THE MEDIA HAS: 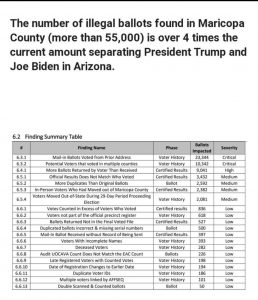 The result is there was massive fraud, election laws were purposefully broken, and there was a complete lack of integrity in Maricopa’s election. They did not tie any of this into our recently released report, but let me.

The report fully supports our numbers and those numbers we have yet to release. Since Cyber Ninjas and the team could not ensure all the ballots received were from legal voters, the recorder’s office shows huge discrepancies if a voter voted or what method they voted with. Who then actually voted? Who voted the method that the legal voter did not use?  The report supports the canvassing results!

So what can we do? All Arizonians and Americans need to demand their legislators immediately convene and pass legislation that goes into effect before the next election cycle in 2022. It needs to contain the following items:

It is simple and will save money reducing the high-priced fraud-riddled machines, but more importantly, it is secure, reliable and ensures one legal vote for each legal voter.

Please take this action now, call your governor and legislators daily, and demand that such a law be passed. If needed, a special session is immediately called before they are fraudulently not elected in the 2022 election!