Democrat attempts to dehumanize their ‘election denier’ GOP opponents is backfiring spectacularly, as a new report from Nate Silver’s FiveThirtyEight reveals there are ‘well over a hundred’ midterm GOP candidates who have denied the legitimacy of the 2020 election ‘have a strong chance of winning their race.’

One such wrong-thinker is Anna Paulina Luna – a GOP candidate for Florida’s 13th district who, per the report, “donned a red-carpet-worthy ball gown to a screening of “2000 Mules,” a debunked documentary that falsely claims to show evidence of widespread voter fraud in the 2020 election.” (The ‘debunking’ makes for great bathroom reading, by the way)

In June, Luna proclaimed “I believe that President Trump won that election, and I do believe that voter fraud occurred.”

And now she’s likely to be elected to Congress..

Luna is the Republican candidate for Florida’s 13th District, on the Gulf Coast around St. Petersburg. During redistricting last year, Republicans redrew this previously competitive district to be much redder, and as a result, Luna has a 97-in-100 shot at beating her Democrat opponent, according to FiveThirtyEight’s Deluxe forecast, as of Monday at 12 p.m. Eastern. (All numbers in this story are as of that same time and date.) 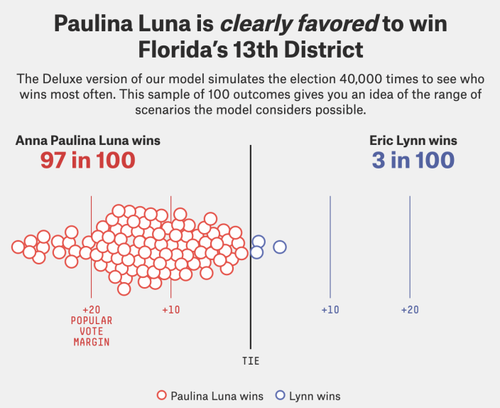 Interestingly, candidates running for the House who question the 2020 election are fairing better than those running to be governor or Senator, with 70% running in “Solid R” races (likely to win), while just two out of seven running for Governor are favored to win. In the Senate, three out of eight ‘election deniers’ (Katie Britt (AL), Eric Schmitt (MO) and Markwayne Mullin (OK)) have better than 95-100 odds.

Also interesting is that GOP candidates who have accepted the legitimacy of the 2020 election are less likely than their ‘election-denying’ counterparts to be in ‘Solid R’ races.

Of the 67 Republican candidates who accept the 2020 election, 30 — or 45 percent — are running in races where they have 95-in-100 or better odds. This includes candidates such as North Dakota Sen. John Hoeven, who is running for reelection and is one of the Republicans who voted to certify the 2020 election results.

On the other side of the coin, around 19% of election denying candidates (36) are running in races where a Democrat is likely to win.

It may also be the case that Democrats have steered the country into such a tailspin that a GOP sack of flour would win, but ‘election denier’ status doesn’t seem to have hurt conservative candidates.

Maybe Nate Silver can tally how the 2016 Democrat election deniers are doing?