PEOPLE WHO LIVE IN GLASS HOUSES SHOULD NOT THROW ROCKS

Democrats alleged votes changed by a secret code and electronic access to voting machines from anywhere in the world!

By Sidney Powell Wait, what?!!

It was the Democrats who first claimed vote tallies were manipulated, flipped, and instructed by secret code in voting machines and that the presidential election should be overturned.

The double-standard in play here has reached a whole new level.

As you know, the 2021 Democrat-controlled Congress has interviewed more than 1000 people, spent months, taken hundreds of depositions, held professionally produced-for-television “hearings,” and spent untold millions of tax dollars—impugning or harassing anyone who had the audacity to allege the 2020 election was stolen by fraud—some even blaming lawyers who filed lawsuits—for fomenting the violence that occurred in the Capitol on January 6, 2021.

Substantial digging has uncovered that it was the Democrats, including Democrats still in key roles on the January 6 Committee who first ever made—or supported lawyers who made—the very same allegations for which they attack us now.

The election of George W. Bush in Ohio in 2004 was a microcosm of 2020. The Democrats screamed about computer fraud, and based primarily on the difference in exit polls versus the votes counted, their lawyers filed a lawsuit which alleged, inter alia:

Then they requested votes be added to Kerry-Edwards and that the electors for Kerry-Edwards be certified instead of those for Bush, as seen in the screenshot below. Id. at 35.

Republicans derided anyone who expressed doubts about Bush’s victory   as   nut   cases   in   ”tinfoil   hats,”    while    the   national media, with few exceptions, did little to question the validity of the election. The Washington Post immediately dismissed allegations of fraud as ”conspiracy theories,” . . . and The New  York  Times  declared  that  ”there  is  no   evidence   of   vote theft or errors on a large scale.”

Those mantras sound familiar, don’t they?

Guess who filed a brief in support of the lawyers who filed this election fraud petition? Who argued vehemently (and correctly) that those lawyers who challenged the 2004 election should not be sanctioned?

None other than January 6 Committee members Zoe Lofgren and Adam Schiff, plus Democrats Maxine Waters, and former Congressmen John Conyers, Jerry Nadler, and many others.

The Democrats joined John Conyers brief, making these arguments—and the same arguments they now vilify and seek to disbar many of us for making:

They also wrote: “For over two hundred years, one of the strengths of our democracy has been that citizens may question the results of an election.” Id. at 2. They argued it was strongly in the public interest to allow election contests and discovery in them. Id. at 2-3. Indeed, election challenges are crucial.

As the Democrats urged, citizens who bring election challenges “vindicate more than their private rights. They protect the broader public interest.” [Election challenges] “involve the right of the people to have the fact as to who has been duly elected to be judicially determined. The inquiry must be in as to whether in a given instance the popular will has been or is about to be thwarted by mistake or fraud. The public interest imperatively requires that the ultimate determination of the contest shall reach the right result.” [citations omitted]. Id. at 3.

They also recognized—when it was their candidates who lost—that “the Verified Petition was filed for the entirely proper purpose of challenging an election that seemed deeply flawed and suspicious.” Id. at16. They even accepted defects in the pleadings as understandable, “[u]nder the incredibly truncated time-frame of an election context, procedural error—even in situations where the requirements are beyond question—occurs.” Id. at 16, 17; see id. at 5, 10.

Against cries of “mind-boggling” claims of “conspiracy theories,” ‘‘theory, conjecture, hypothesis, and invective’’ rather than evidence, harassment; and, a challenge filed “only for partisan political purposes,” id. at 16, the Democrats closed their strong brief with this:

Under these circumstances, a finding of bad faith and imposition of sanctions would be highly inappropriate and would serve to chill advocacy of important interests that are implicated by election contests. One of the strengths of our democracy is that citizens are free to question the results of an election. Those who in good faith attempt to complain through legally provided channels about the deficiencies of an election are protected by law from retaliatory sanction motions. (emphasis added). Id. at 17.

With the urging of these Democrat members of Congress, and in a correct application of the law, the Ohio Supreme Court did not sanction the attorneys who filed the election challenges. The same should be true today.

The Congressional Democrats went on to challenge the seating of the Ohio electors—the first such challenge in our history—and produced a lengthy report.

As you can see, the hypocrisy and duplicity of the January 6 Committee and the Democrats know no bounds. The more we learn, the more it appears there has long been only one political machine running “the matrix,” creating an illusion we were making the choices, and as Mr. Obama himself noted, each “side” has cheated in elections.

How long has computerized voting and vote counting to defraud Americans of their sacred votes and install whomever the puppet masters prefer as President of the greatest power on earth? Who are the oligarchs making these decisions?

Our elections simply cannot be about who cheats the best. What if the Democrats were right about Ohio in 2004?

Was Bush elected in Ohio by tactics that have now been perfected and used in multiple states? Who else was?

How long has it been since the American people really elected their president—or other officials?

How deeply and widely has the machine fraud infected elections at every level of our Republic and the states?

Until we get paper ballots, hand-counted, and citizen voter identification, we delude ourselves by thinking we have a Republic or that “we the people” are electing our leaders.

And, given the information above, it is duplicitous and ridiculous to attack those of us who made what we now know to be the same allegations the Democrats made in 2004. The 65Project—whose sole purpose is to demonize and destroy the lawyers who challenged the 2020 election—to “shame them and make them toxic in their communities and in their firms”—should never have received charitable non-profit status, and it should be terminated for sheer hypocrisy or estopped by law from filing anything.

We can fix this if we unite immediately to demand this simple and far less expensive means of electing our government. No one should be opposed to an honest and transparent election process. Americans are entitled to it, and our elected officials who live in glass houses should not be throwing rocks. 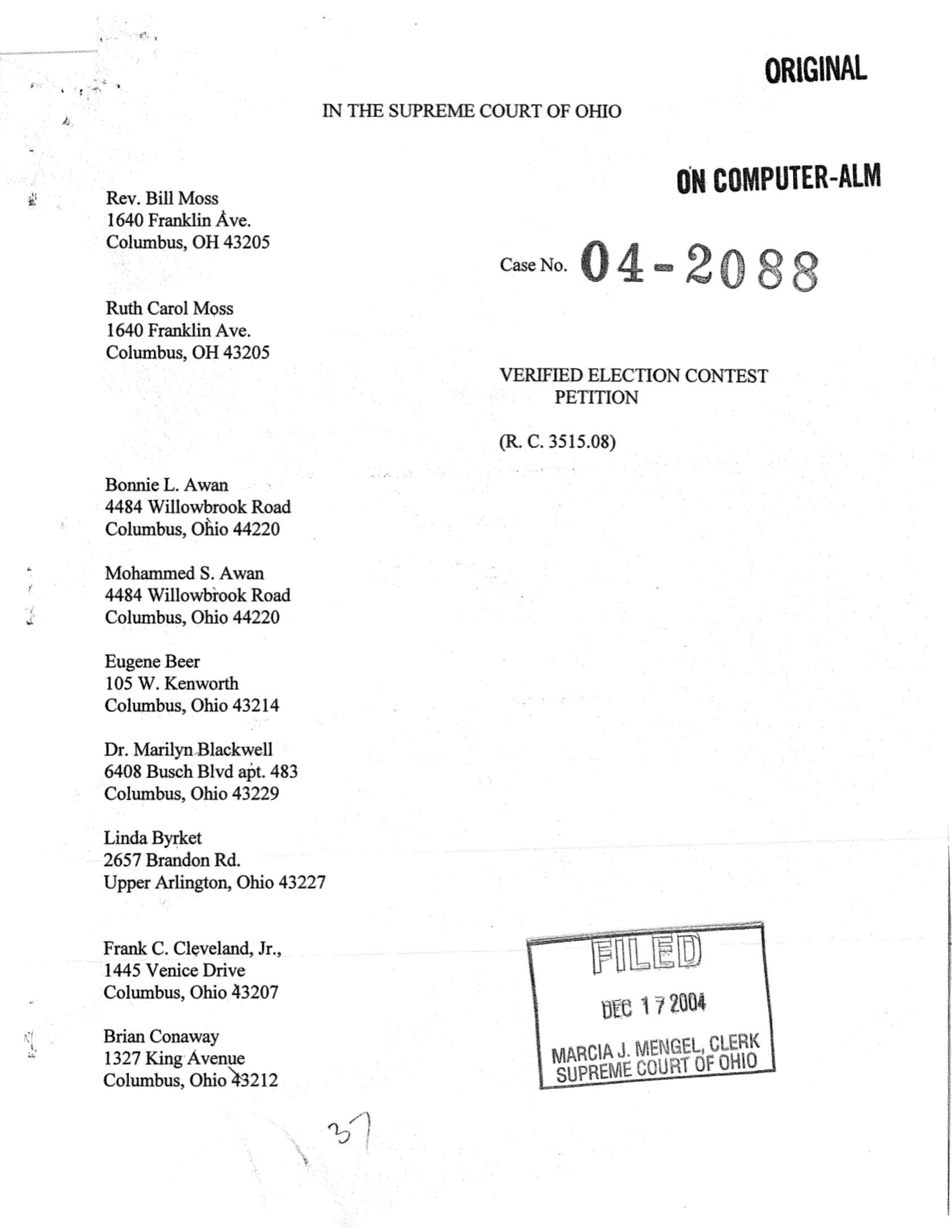 MOSS vs BUSH MOTION FOR LEAVE TO FILE BRIEF 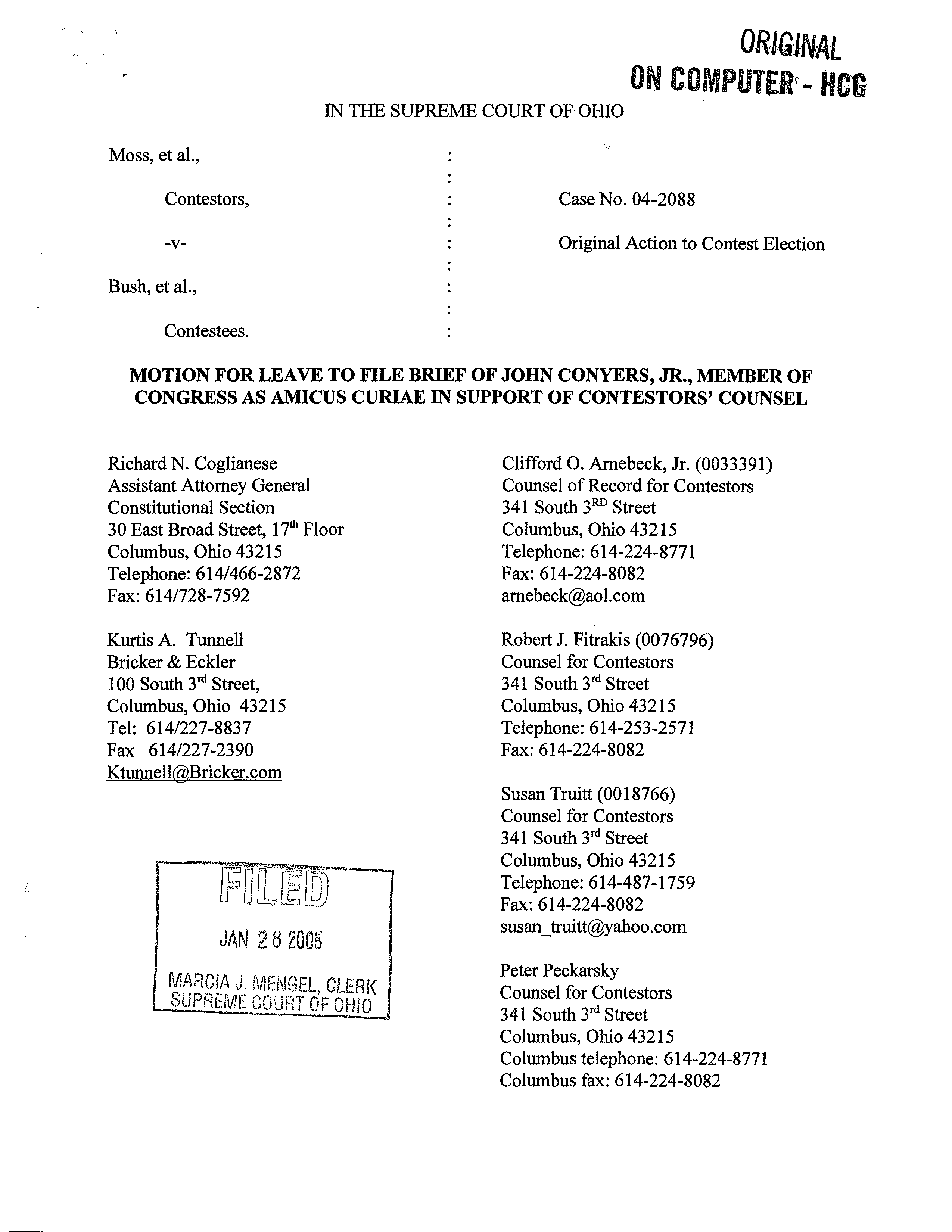 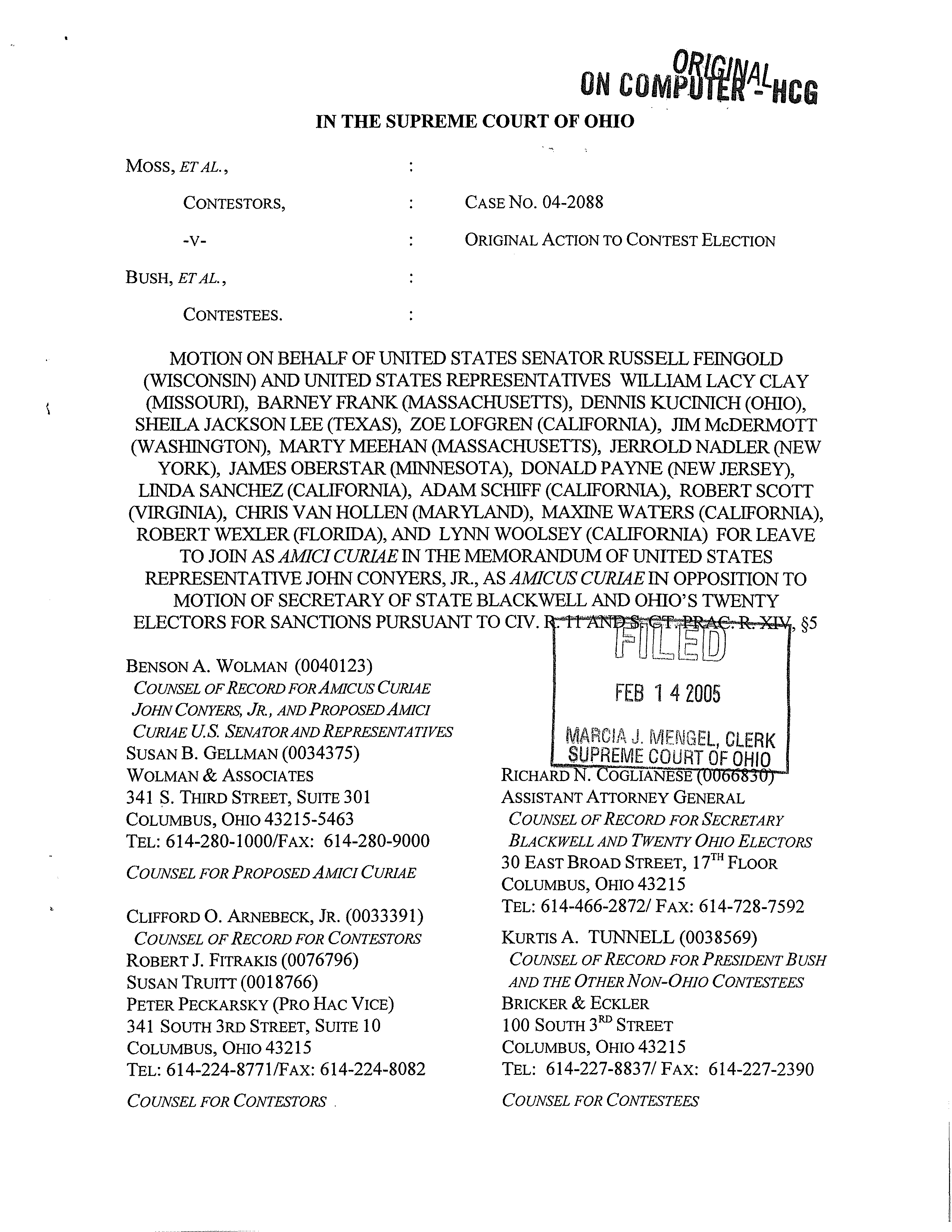 MOSS vs BUSH AMICUS CURIAE IN OPPOSITION TO MOTION 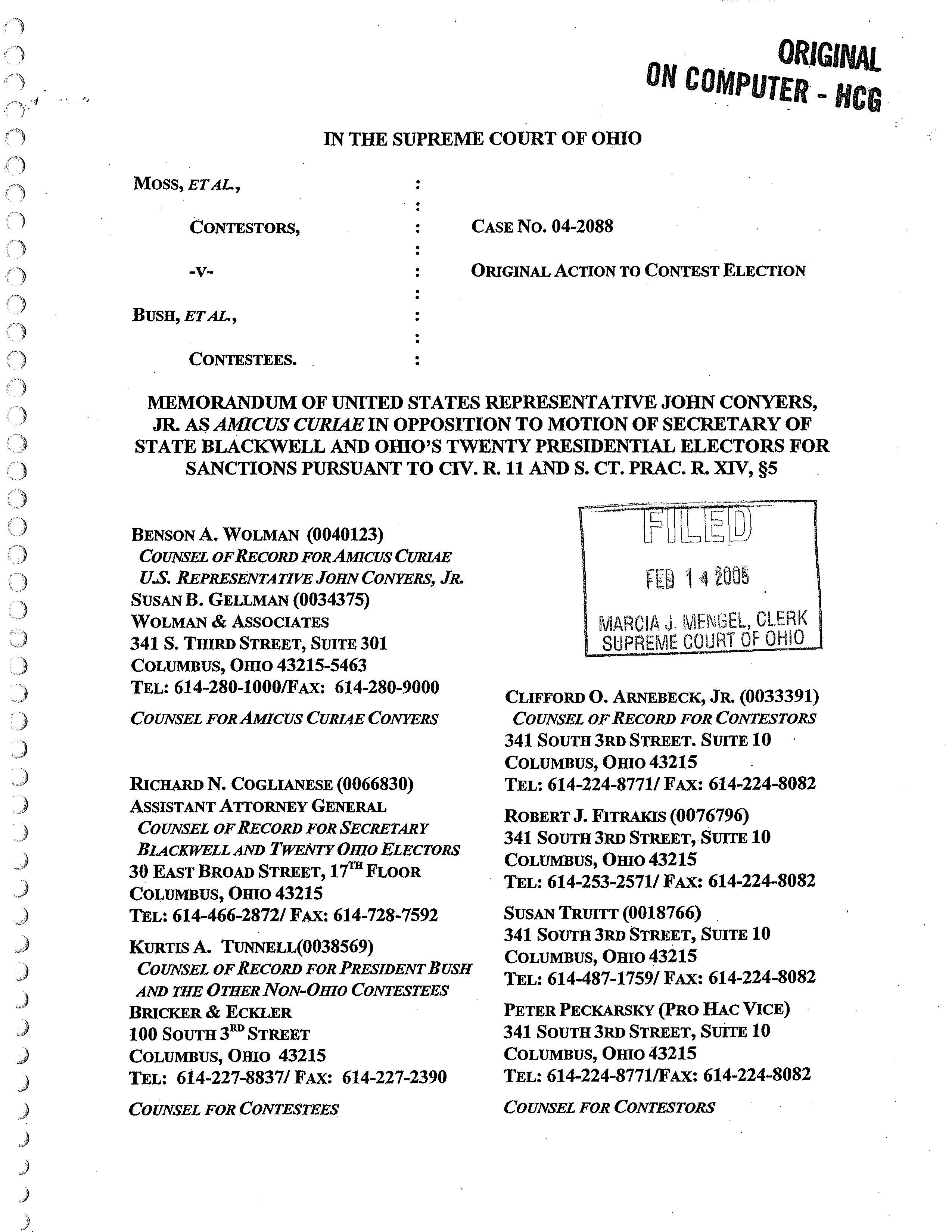