September 13, 2021 (Phoenix) On September 10, 2021, Maricopa County issued a statement entitled “Maricopa County Recorder and Assessor Respond to Partisan Canvass Report” in response to the Election 2020 Grassroots Canvass Report. In their joint statement, the County Recorder Stephen Richer and Assessor Eddie Cook asserted that the address at 2058 E. Wildermuth Ave. in Tempe was not a vacant lot and stated it was a mobile home property through 2020. They attached an image provided by the Maricopa County Assessor’s office stating that the photo “shows the previous layout of this property.” In searching the County Assessor’s website for historical photos of this property, it appears that the image they chose to represent the property in question was from sometime prior to 1/16/2016. Photos of this property obtained directly from the Maricopa County Assessor’s website, dated 10/22/2020, clearly demonstrate that this is and was indeed a vacant lot prior to the 2020 General Election. (https://maps.mcassessor.maricopa.gov/ipa.aspx?1=33.41348927379448&2=111.89785475007028&a=2058%20E%20WILDERMUTH%20AVE%20TEMPE%2085281) 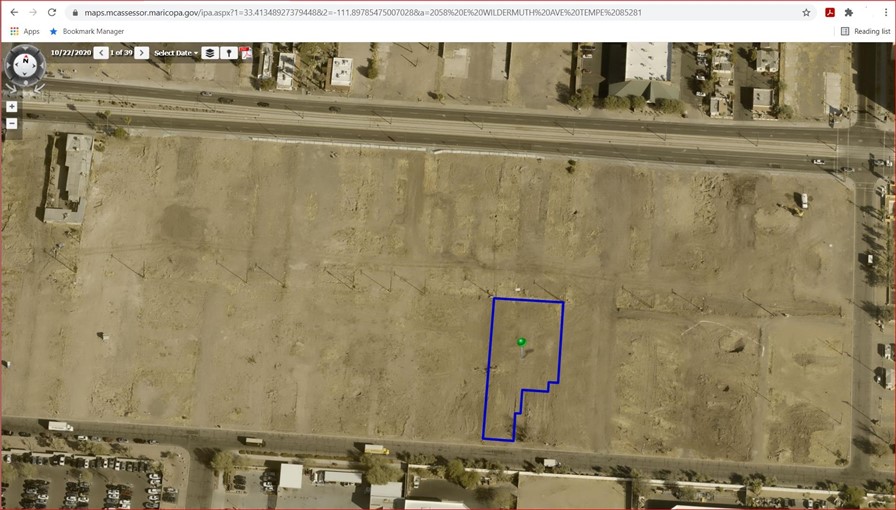 A demolition permit for this property was issued by the City of Tempe on 1/13/2020.

Additional photographic evidence, eyewitness testimony and public records confirm that the mobile home park owners sold this property on February 19, 2020, to an investment/development company and the property along with all the surrounding structures were subsequently completely leveled in the first half of 2020.

It is troubling that the Maricopa County Recorder and Assessor deliberately chose an image that is more than 5 years old to represent this property in their statement when there are plenty of other more current images, they could have selected from the County Assessor’s website to accurately portray this property to the public.

The Maricopa County Assessor’s website provides public access to historical images of properties. For example, this image below dated 12/05/2019 is the next oldest image to the one we displayed above dated 10/22/2020. You can see from the dropdown that there are multiple date ranges to choose from. 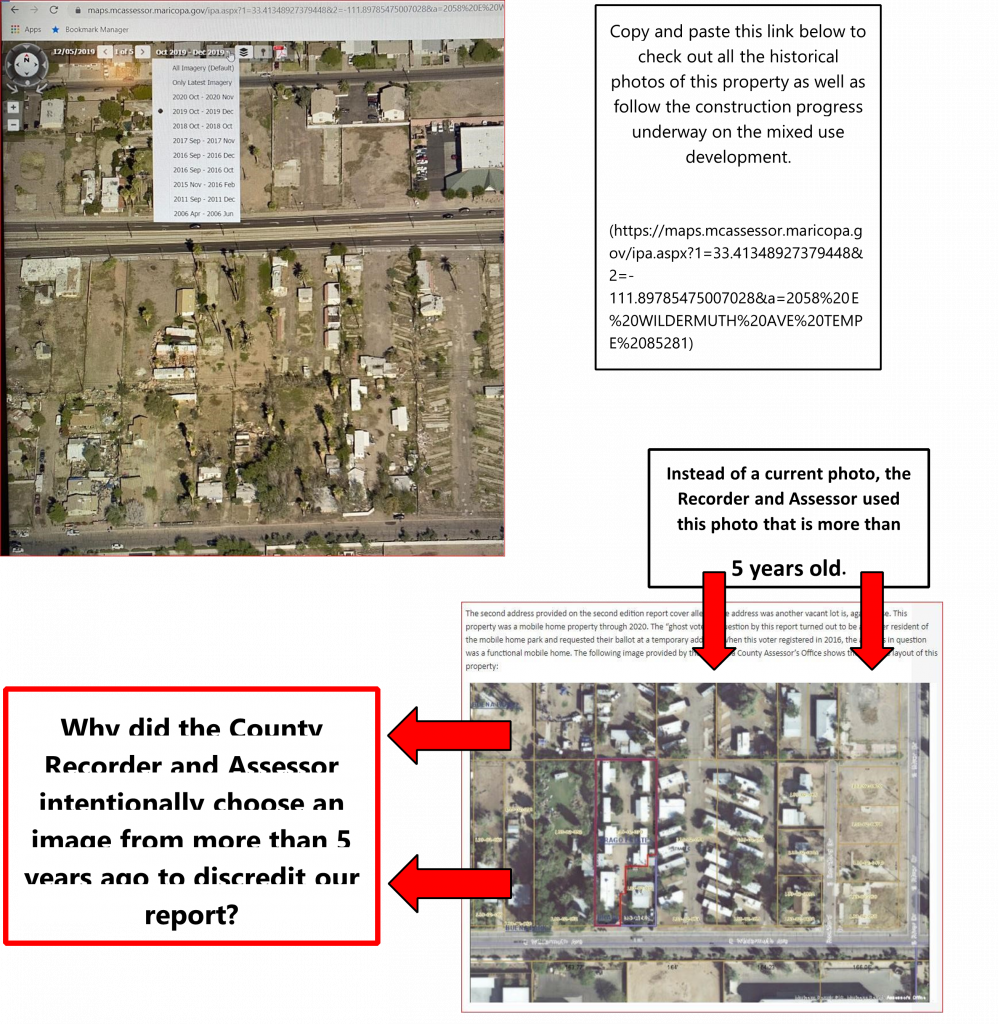 The 5-year-old photo wasn’t the only misleading public response the County Recorder and Assessor gave regarding our Election 2020 Grassroots Canvass Report.

On September 8-9, 2021, in response to the release of the Canvass Report, County Assessor Eddie Cook stated on his public social media, ”this address was a legitimate address to receive mail before ownership changed in 2021.”

Mr. Cook’s statement is in direct conflict with the photo on the first page above dated 10/22/2020 taken directly from the Maricopa County Assessor website. The property along with all the surrounding lots were just dirt. All homes, structures and mailboxes had been leveled and removed in preparation for the new development being built.

Assessor Cook also stated, “Again, I met with the County Recorders office to verify this voter. The voter registered in 2016. Then in 2019 this voter moved and request his all his mail including his ballot be forward to another address. This is allowed by State Law.” (https://www.facebook.com/ecookaz) 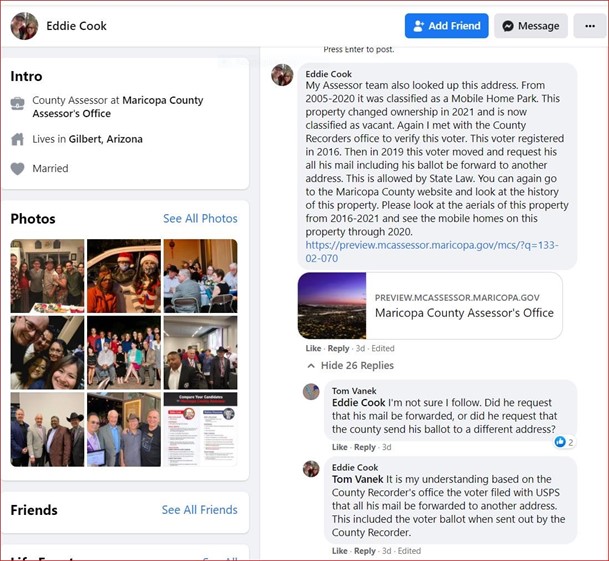 Assessor Cook clarifies multiple times in this 75 comment public chat that he met with the Recorder’s Office and that the resident moved and requested all his mail, including his ballot to be forwarded to another address.

Assessor Cook’s false statements are bolstered by Maricopa County Recorder Stephen Richer on his Twitter account. In one statement which says in pertinent part “…There was a home at 2058 E. Wildermuth when registered and in 2019 a forward request for a year.” 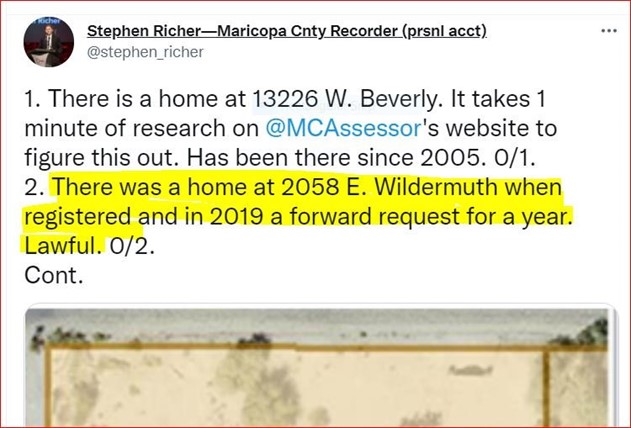 No. As required by law, all official election materials, such as ballots, are marked “Do Not Forward – Return Service Requested”.  If the early ballot is returned to us indicating you are no longer at the residential address on file or that a forwarding order is on file, this will then begin the process of deactivating your voter registration record unless a “Temporarily Away” order is in place for your address.  Always make sure to update your voter registration record when you move. If you plan to be out of town during the early voting period for any election, you will need to make a one-time request to have your ballot mailed to a different address.

The public social media statements by Eddie Cook and Stephen Richer that this voter submitted a forward request for his ballot for one year in 2019 is contrary to Arizona State Law, the county’s own guidance, and the county’s records for this voter.

Why are the Maricopa County Recorder and Assessor stating that the former resident’s ballot was forwarded when A.R.S. 16-558.01 states official ballots are NONFORWARDABLE?

In their joint response on September 10, 2021, Recorder Richer and Assessor Cook modified their story, now stating that the former resident “requested their ballot at a temporary address.” Maricopa County provides the following information regarding temporary mailing addresses on its website. (https://recorder.maricopa.gov/site/faq.aspx)

If you are a voter not already on the Permanent Early Voting List, you can submit your temporary mailing address to Request.Maricopa.Vote or by submitting a written request through one of the options listed below.

Temporary mailing address requests can be submitted between 93 and 11 days prior to Election Day.

Per the County website, a “temporary away” order is if you intend to be away from your address around the time of the election. The former resident moved away permanently from 2058 E. Wildermuth Ave. A demo permit was issued by the City of Tempe on January 13, 2020. County Recorder Richer and Assessor Cook both confirm that the registered voter moved from the address in 2019, yet they assert that the registrant contacted the Recorder’s Office in 2019 to request his ballot be mailed to a temporary mailing address a minimum of 11 months (330+ days) prior to when ballots were to be mailed out in October 2020.

Although Recorder Richer and Assessor Cook now assert that the former resident requested a “temporarily away” address 330+ days before ballots were to be mailed out, the County’s EV32 official record of all sent ballots for the 2020 General Election indicate that on 10/23/2020, a ballot bearing the name of the former resident (VoterID 4531737*) was mailed to the vacant lot at 2058 E Wildermuth Ave Tempe.  As you can see from the picture taken directly from the County Assessors website, dated 10/22/2020, this address, along with all the surrounding lots were completely leveled in preparation for the Eastline Village Culdesac mixed use complex under development. It is clear from the photo dated 10/22/2020 that the residence and its mailbox were no longer there for a ballot mailed on 10/23/30 to be received.

*(The voter id number is a correction. The voterID 4830013 with the same surname used in the first response, did not vote in the election, but was still registered to vote from this address.)

County records confirm a General Election 2020 ballot for the former resident  was mailed to the vacant lot.

The County recorded the mail-in ballot for the above address and VoterID 4830013 as being received back by the Elections Department on 11/01/2020, nine days later. This return receipt is officially recorded by the County in its EV33 files which are an official record of returned ballots. A mail in vote from this address is in the Final Voted VM55 file.

County records confirm a ballot for the former resident was returned from the vacant lot.

The County’s VM34 voter registration files confirm that the address on file remained 2058 E. Wildermuth Ave from the time the voter registered in 2016, after he moved in 2019, during the general election in 2020, into 2021. At some point between February 2021-March 5, 2021, although this voter still lives in Maricopa County, unbeknownst to him, he was removed from the voter rolls. He is no longer registered to vote.

Note that this removal would be consistent with the law if his 2020 ballot had been returned to the County, unopened by the post office due to a mail forwarding request or non-deliverable address, which per Arizona State Law begins the voter de-registration process. The County states he had a 330 day in advance “temporary away” address. So why did his registration get cancelled without his knowledge?

Who cast the vote from the vacant lot?

It is deeply troubling that Maricopa County Recorder Stephen Richer and Assessor Eddie Cook responded to our Grassroots Canvass Report with false information in an apparent attempt to mislead the public. Except for speaking with eyewitnesses, all the information we gathered was from researching Maricopa County and city public records.  Through publicly available photographic documentation, public records, and eyewitness testimony the following is clear: 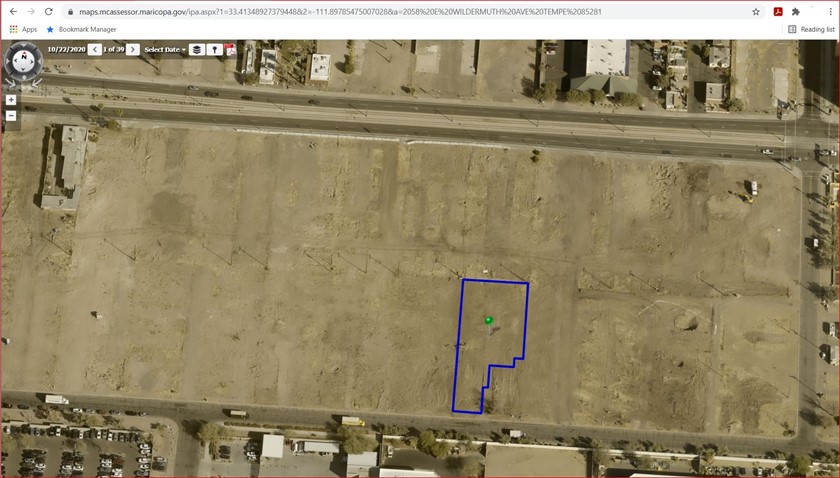 misleading the public about this vacant lot? 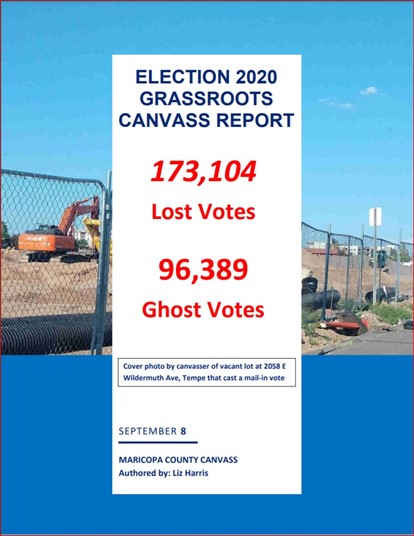 Please take an opportunity to participate in our electronic canvass and you will receive a complimentary copy of Election 2020 Grassroots Canvass Report. (Canvass50.org)

This is a clear problem, as it is physically impossible that this ballot could have been received, voted, and returned from this empty lot. It merits investigation by the Arizona State Attorney General.

We anticipate that within the next few weeks, after clearance by legal counsel, we will be providing the affidavits from the canvass report to either the Attorney General’s office or to the Arizona Senate, or both.

What else are the Maricopa County Recorder and Assessor misleading us about?

The County asserts that our report was a “Partisan Canvass Report”. We reject that falsehood. Our grassroots group consists of hundreds of canvassers, representing Democrats, Republicans, Independents and

Libertarians, that have united for one purpose: finding the TRUTH. We are working to protect each and every individual’s right to vote, to have their vote count and to not have their vote taken from them. We are working tirelessly to protect every person’s legal vote. We believe that those we elected should be working tirelessly to ensure every legal vote is protected, instead of making false allegations and intentionally misleading the public.

It should also be noted that Liz Harris has no affiliation with Stop the Steal, as asserted in the County’s statement.

We do want to take the opportunity to mention that in the initial release of our report we made an unintentional typo in the address of the photo of the vacant lot that we posted. We apologize for any confusion this may have caused. We listed the address as 13226, instead of 13326. There is a vacant, undeveloped lot at the corner of Beverly Lane and 134th Ave that appears its address would be 13326.  13326 did not have any votes cast from it, so we rectified the error by reissuing the report shortly thereafter and replacing the photo and address with one from another vacant lot that did in fact have a vote cast from it. We are aware that there is a home with four registered voters at 13226.