Original article.  This playbook should be familiar to everyone by now, but just in case…
January 28, 2022 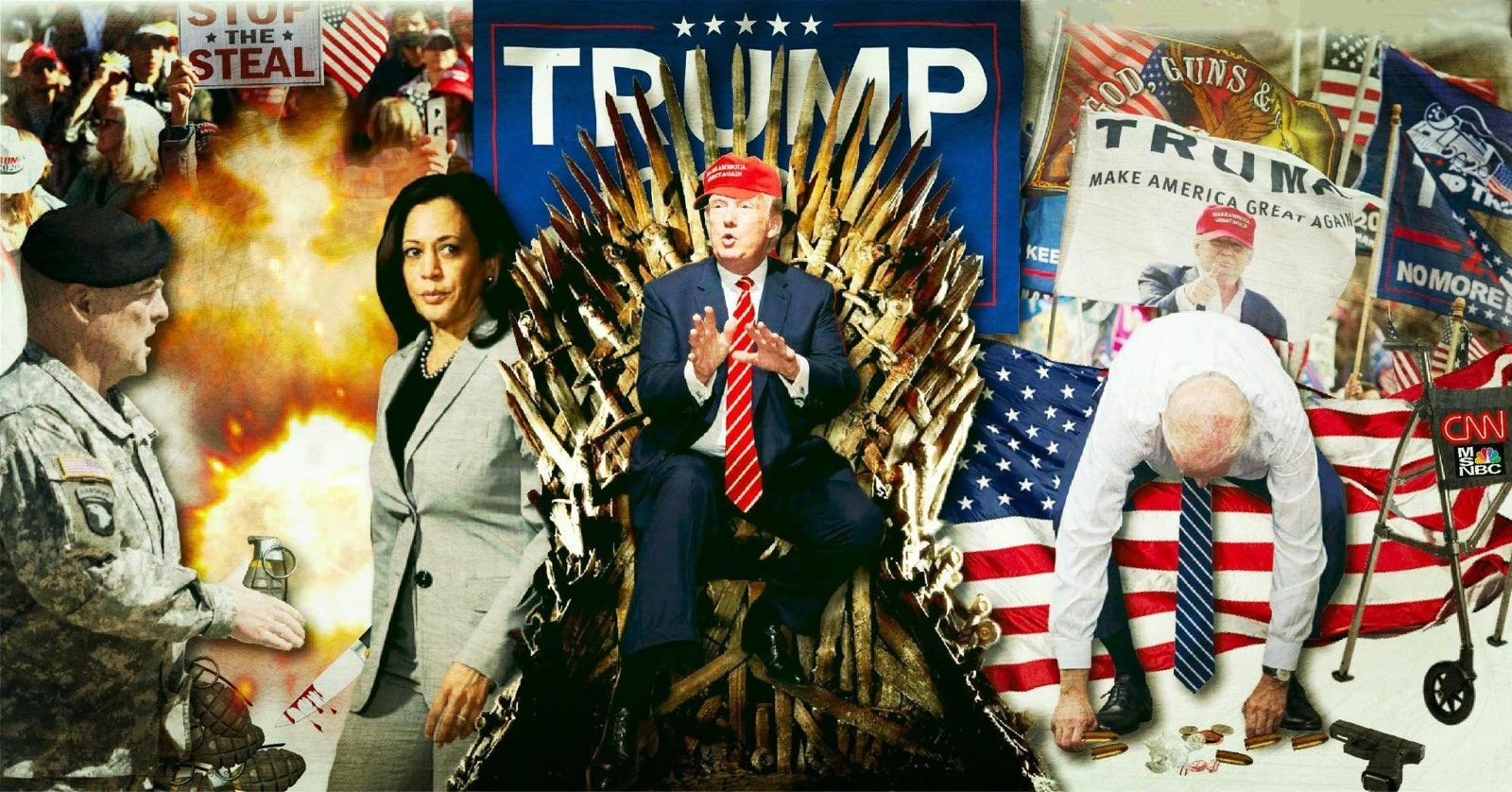 In 2020, despite unprecedented efforts to rig the outcome with delayed vaccine trials, suppression of the Hunter Biden story, rewritten election rules, and ballot harvesting, Joe Biden eked out a “win” by the smallest of margins. Now, one year into his administration, the old man is gruesomely unpopular. ’70s-style inflation is back, dozens of cities are setting murder records, the Afghan War ended in profound national humiliation, and Biden’s signature legislative initiative is Build Back Deader. Endless Covid panic, critical race theory in schools, and the urban crime explosion may finally break apart the Democratic coalition of the fringes that focuses all of America’s hatred onto a dwindling population of white middle class kulaks.

All the while, Donald Trump and the movement he created wait in the wings, chomping at the bit.

The American regime is terrified. They moved heaven and earth to derail Trump’s term in office and turn him out after four years. Now the ruling class faces the very real prospect that, if the 2024 election is remotely fair, he will be swept back into the White House, more powerful than ever before…

America’s governing class and its media apparatchiks have repeatedly labeled Trump’s complaints about the 2020 election “the Big Lie.” But there is a Bigger Lie afoot, one with a much greater bearing on the future. The Bigger Lie is this: That the January 6 Capitol incident was an “attempted coup,” and that this coup was launched by a wider pro-Trump “anti-democracy” movement (as opposed to the anti-Trump, anti-democracy movement known as the FBI). This movement, the Bigger Lies goes, is a “danger to our democracy” and must be hunted down to destruction.

In the name of this Bigger Lie, America’s governing class of academics, security staters, elected lawmakers, and media propagandists are preparing to sweep away what remains of America’s democratic process. Their goal: To render the 2024 election null, with a preordained outcome that poses no danger to the ruling elite’s wishes. And the planning for this revolution is happening right out in public.

This planning is taking place in public because it has to be. America’s elites are trained in the methods of the so-called “color revolution.” Unlike the palace coups and military invasions of old, a color revolution requires control of the narrative. November 5, 2024 may be almost three years out, but the public must be conditioned if they are to accept what is planned for them.

The Atlantic magazine dribbled out a warning of the plot back in October. In his article entitled, “Kamala Harris Might Have to Stop the Steal,” Russell Berman argues that, while it would have been bad if Mike Pence had intervened to prevent Joe Biden’s victory last January, it will be perfectly legitimate if Harris does the same in 2024.

For a few hours inside the ransacked Capitol on January 6, then–Vice President Mike Pence helped to preserve the democratic order by insisting that he was powerless to change the outcome of the election.

Should Trump or his acolytes try to subvert the 2024 election, the last Democrat with any power to stop the steal—or at least try to—would be Harris. “She’s certainly going to have quite a job on her hands on January 6, 2025,” Laurence Tribe, a Harvard law professor and liberal constitutional scholar, told me. Nine months ago, Tribe and other Democrats praised Pence for interpreting his authority narrowly, but the next time around, they might ask Harris to wield the same gavel more forcefully. [The Atlantic]

How might Kamala wield the gavel more “forcefully”? Tellingly, Professor Tribe prefers to keep it a secret for now.

“I don’t want to lay out a complete road map for the other side, because I think sometimes they’re not as smart as they think they are,” Tribe told The Atlantic.

Writing in the Washington Post one week before Christmas, three retired Army generals further developed the open conspiracy against a free and fair election in 2024. The three stooges charted new waters of hyperbole and hysteria, warning of an impending civil war in the United States requiring, conveniently, “decisive action” from the military to stop a “Trumpian loser.” The fix for this grave danger? Naturally, a major purge of the military, and the imprisonment of senior Republican leaders:

As we approach the first anniversary of the deadly insurrection at the U.S. Capitol, we — all of us former senior military officials — are increasingly concerned about the aftermath of the 2024 presidential election and the potential for lethal chaos inside our military, which would put all Americans at severe risk.

In short: We are chilled to our bones at the thought of a coup succeeding next time.

All service members take an oath to protect the U.S. Constitution. But in a contested election, with loyalties split, some might follow orders from the rightful commander in chief, while others might follow the Trumpian loser. Arms might not be secured depending on who was overseeing them. Under such a scenario, it is not outlandish to say a military breakdown could lead to civil war.

…
With the country still as divided as ever, we must take steps to prepare for the worst.

First, everything must be done to prevent another insurrection. Not a single leader who inspired it has been held to account. Our elected officials and those who enforce the law — including the Justice Department, the House select committee and the whole of Congress — must show more urgency.

But the military cannot wait for elected officials to act. The Pentagon should immediately order a civics review for all members — uniformed and civilian — on the Constitution and electoral integrity. There must also be a review of the laws of war and how to identify and deal with illegal orders. And it must reinforce “unity of command” to make perfectly clear to every member of the Defense Department whom they answer to. No service member should say they didn’t understand whom to take orders from during a worst-case scenario.

In addition, all military branches must undertake more intensive intelligence work at all installations. The goal should be to identify, isolate and remove potential mutineers; guard against efforts by propagandists who use misinformation to subvert the chain of command; and understand how that and other misinformation spreads across the ranks after it is introduced by propagandists.

Finally, the Defense Department should war-game the next potential post-election insurrection or coup attempt to identify weak spots. It must then conduct a top-down debrief of its findings and begin putting in place safeguards to prevent breakdowns not just in the military, but also in any agency that works hand in hand with the military.

The military and lawmakers have been gifted hindsight to prevent another insurrection from happening in 2024 — but they will succeed only if they take decisive action now. [WaPo]

The comments beneath the piece make it clear that the intended audience, the professional-managerial segment of the Democratic base, is getting the message. The most-liked of the nearly 7000 comments on the article proposes banning Fox News from mess halls and other common areas at military installations. Another commenter among the top five proposes charging Republican leaders with treason. “A good place to start would be to immediately remove all service members who have refused the lawful order to be vaccinated,” writes another top commenter.

In the following days, regime stenographers pushed even more articles about a supposedly inevitable Trumpist insurgency that will surely rise up in 2024 unless we further empower the professor-managerial class that occupies the commanding heights in this country. On December 20, David H. Freedman, writing in the digital pages of Newsweek, spun up his own fantastical scenario about the upcoming, inevitable Trump uprising.

In 2020, 17 million Americans bought 40 million guns and in 2021 were on track to add another 20 million. If historical trends hold, the buyers will be overwhelmingly white, Republican and southern or rural.

America’s massive and mostly Republican gun-rights movement dovetails with a growing belief among many Republicans that the federal government is an illegitimate tyranny that must be overthrown by any means necessary. That combustible formula raises the threat of armed, large-scale attacks around the 2024 presidential election—attacks that could make the January 6 insurrection look like a toothless stunt by comparison. “The idea that people would take up arms against an American election has gone from completely far-fetched to something we have to start planning for and preparing for,” says University of California, Los Angeles law professor Adam Winkler, an expert on gun policy and constitutional law.

Finally, on Dec. 23, Melissa Block of NPR published a piece entitled “The clear and present danger of Trump’s enduring ‘Big Lie’.” Once again, the focus was on the need for urgent action, right now, to check the amorphous danger of an impending Donald Trump coup d’etat. After all, a “failed coup” is just practice for a “successful one,” according to a professor quoted in the NPR piece:

“It wasn’t enough, but next time, it could well be enough. And the fact that it’s been rehearsed makes me worry,” [Yale professor Timothy Snyder] says. “This is what historians and political scientists who study coups d’etat say. They say a failed coup is practice for a successful one.”

What we’re potentially looking at, Snyder warns, is nothing less than the end of the democratic United States as we’ve come to know it.

“That’s just the reality,” he says. “And in order to prevent things from being frightening, you have to look right at them and say, ‘OK, that’s the monster. How can I disassemble it? How can I take it to pieces? How can I make sure that that story isn’t our only story?’ But it will be unless we tell it to ourselves straight.”

The regime media has relentlessly pushed that phrase — “failed coup” — in the last few months.

A smattering of mainstream media headlines demonstrate the crescendo of hysteria and hyperbole emanating from the nation’s chattering class.