Original article. Is the J6 Committee continuing the latest portion of the witch hunt in a similar way?
October 14, 2022 | Sundance | 103 Comments

As the third day of the trial of Igor Danchenko took place a Clinton campaign operative named Charles Dolan was called to the witness stand to explain his relationship to the accused fabricator of information used within the Christopher Steele dossier.  [TechnoFog has a deep dive on the testimony – HERE]

When Charles Dolan was called to the witness stand, he admitted under direct questioning that he “embellished” and manufactured information provided to Igor Danchenko. He also noticed when the Dossier was made public that information he provided was included.  In essence, Dolan was one of the many people who generated nonsense lies, which became fabrications within the Steele dossier that the FBI later used to gain a FISA warrant.

It is infuriating, albeit not surprising, to see leftist media like Politico report on the Dolan lies as if the held no consequence.  This, after years of pushing the dossier material in order for leftist media to engineer completely fabricated narratives.

(Politico) – […] At one point during questioning, Dolan admitted to having lied to Danchenko in an email in the summer of 2016 about a “GOP friend” he claimed to have met with and who he said provided him with information about former Trump campaign chair Paul Manafort’s resignation. Dolan told the jury that he had “embellished” that claim to Danchenko, and that he had actually obtained the information about Manafort’s resignation from watching cable news, not from a Republican friend.

“I thought I would just embellish a bit to make it seem like his contacts were good,” Dolan said.

Prosecutor Michael Kielty pointed out similarities in the information Dolan provided Danchenko in that 2016 email with information that had ended up in a subsequent report from the dossier, dated just two days after Dolan sent the email. Dolan said that he never provided additional insights to Danchenko, and that he wasn’t aware at the time of why Danchenko was seeking information from him.

“I just thought he wanted to know what the atmospherics were around the resignation,” Dolan said.

Dolan also said he called Danchenko the day that Buzzfeed published the dossier, on Jan. 10, 2017, to “see if he knew where this came from.” The witness said Danchenko claimed he wasn’t sure where the dossier came from and would look into it and get back to him, but never did. (more)

NOTE: Keep in mind that Igor Danchenko is being represented by Hillary Clinton’s lawyers [LINK]

Igor Danchenko was working closely with Democrat Party public relations executive Charles Dolan to funnel the fabricated source material to Chris Steele.  Chris Steele, under contract with Fusion-GPS to assemble opposition research that would be used by allies in the media and FBI, then took the Danchenko/Dolan fabricated claims and put it into his dossier.

DOJ official Bruce Ohr, the husband of another Fusion-GPS employee Nellie Ohr, was used as the laundry conduit, the appearance of a second sourcing, to put the dossier into the hands of the FBI.  Simultaneously Glenn Simpson took the dossier and shopped it to his media pals.  That’s how the entire story was created; and yes, we already knew most of this and Durham is simply filling in the details.

We asked years ago: “Think about a New York Times, Politico, CNN or Washington Post journalist now having to accept that every column inch they have written in the past [four years] was built upon a foundation of lies. Do we really think such a catastrophic level of flawed ideology could ever reconstitute into genuine reporting of fact-based information?”  Of course not.

True to form, Politico just brushes aside their years of pushing fabrications by now saying the dossier is “a collection of reports compiled by a former British spy containing now-debunked salacious rumors and allegations about former President Donald Trump’s ties to Russia.”  Move along, move along.  Ignore media efforts over six years to push this mis-dis-malinformation, or what ordinary people simply call lies.

John Durham also questioned Washington Field Office FBI Agent Kevin Helson, who was the handler for Igor Danchenko as a confidential human source (CHS).  Durham blasted Helson for not vetting Danchenko in a variety of customary formats, including the use of a lie detector to ensure Danchenko was not working as a disinformation specialist as directed by a foreign government.

What Durham outlined is essentially that the FBI didn’t care whether Danchenko was a viable and trustworthy source for information, nor did they care the information he was providing was accurate – only that it fed the need of the FBI operatives who were working under the political motive to target Trump.   The FBI paid Danchenko over $200,000 for his false information and his handler agent Helson even recommended to pay Danchenko a lump sum $346,000 after they were finished with him.  That payment was never made.

As noted by Techno:

“This is the second day in a row that Durham has basically treated the FBI Agents/Analysts as hostile witnesses. First it was Auten, now it was Helson. It’s just not about the incompetence and their basic investigative failures.

It’s also that these FBI Agents and Analysts come across as arrogant, at least from my reading of the transcripts, and continue to hold themselves essentially blameless. All the while, they have at times defended Igor Danchenko, the witness who didn’t tell them the truth. It’s not a good look for the Bureau.” (more)

Keeping all of this Durham information in mind…. The million-dollar question that DC will avoid:

….. What was Special Counsel Robert Mueller doing for two years? 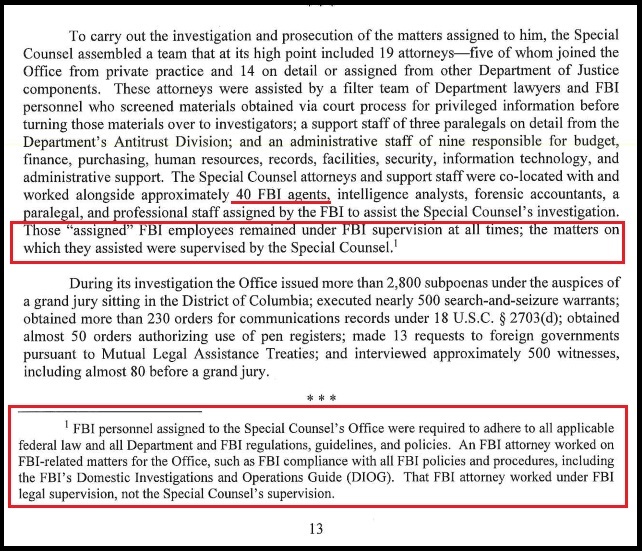