Original article.  Apparently, it was never about getting everyone qualified out; only an arbitrary quota.  It certainly seems that an investigation is required here.  If it were President Trump an investigation would already be underway.  Meanwhile, private citizens continue to try fulfill the sworn obligation this administration has abdicated.
By Jim Hoft
Published September 4, 2021 at 3:14 pm 347 Comments

The US military knew there was going to be an attack at the Kabul Airport last week.

On Wednesday, August 25th the US State Department issued a warning to US nationals to avoid traveling to Hamid Karzai Airport in Kabul, Afghanistan. The US told those waiting outside to leave immediately.

On Thursday, August 26th a suicide bomber blew himself up near the Abbey Gate at the Kabul Airport killing 13 Americans:  11 US Marines, a Navy Hospitalman, and an Army Staff Sgt.

Following the attack, one Marine wrote a text message to The Raid Team.  The Marine who was on the scene disclosed that there was a countdown before the suicide bomber detonated himself.

According to our source, there were also reports of Marines who saw the Taliban laughing after the deadly blast. 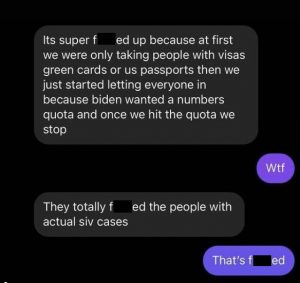 If true this is the latest impeachable offense committed by the lawless Biden regime.

The New York Times on Saturday published an article that suggests this was the case — The US was not vetting “refugees” at the Kabul Airport.

Refugees pushed their way onto airplanes. Hundreds of children were separated from their parents. Rogue flights landed without manifests. Security vetting of refugees was done in hours or days, rather than months or years…

The total number of evacuees, and where they are currently waiting, is still not clear, though Mr. Biden said Tuesday that more than 120,000 had been evacuated. As of Friday, Alejandro N. Mayorkas, the secretary of the Department of Homeland Security, said about 40,000 people had arrived in the United States at airports near Washington, D.C., and Philadelphia. Officials expect about 17,000 more to arrive by next Friday, and thousands more may ultimately end up living in a dozen other countries…

But unclassified briefing documents titled “2021 Afghanistan Repatriation Mission” reveal that in some cases, spotty information is being collected: Flight manifests have been at times incomplete or missing, visa or citizenship status is unknown, and there is a lack of basic demographic data.