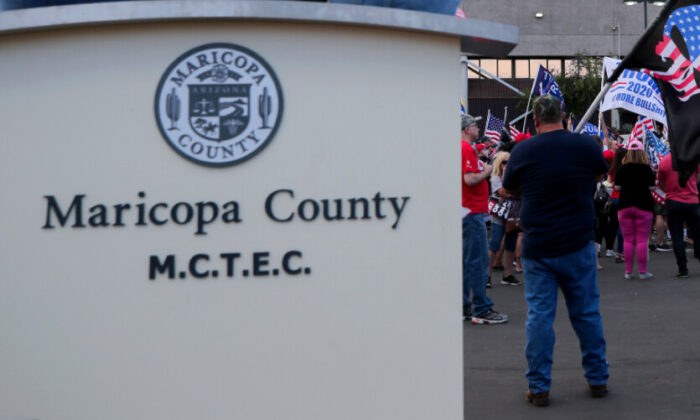 The Board of Supervisors of Arizona’s most populous county and the state Republican-led Senate have reached an agreement that resolves an impasse over the release of county election routers.

In a special session Friday, the Maricopa County Board of Supervisors approved an agreement with the Senate that “keeps county routers and other sensitive materials out of the hands of the Senate’s contractor, Cyber Ninjas.”

“The agreement also protects taxpayers and ends a legal dispute over the Senate’s ongoing election review by bringing the county into full compliance with outstanding subpoenas,” the board said in an official statement.

Under the agreement, a special master, or third-party overseer, will hire a team of technology experts to review the county’s routers and splunk logs and then answer questions posed by state senators.

“At all times, the routers will remain in production and in the custody of Maricopa County,” according to the board statement. “The agreement is structured in a way that ensures no personal identifying information or sensitive law enforcement or court-related information is revealed.”

“This agreement is a step in the right direction,” said Chairman Jack Sellers prior to the vote following a closed session. “I truly believe today’s agreement resolves many issues between the board and the Senate.”

“HUGE win for the Az Senate today!” wrote state Senate President Karen Fann on Twitter. “Maricopa settlement gives us all the data needed to complete the review of the routers & splunk log to the most comprehensive election audit in history. We got everything we need and more. Maricopa County goes home with its tail between its legs.”

Brnovich gave the board until Sept. 27 to comply fully with the subpoenas related to the 2020 election audit or risk losing $676 million in shared state sales tax revenue.

“While the county disagrees with that finding, litigation always comes with risk,” the board’s statement added. “County leaders determined they would not be able to do the people’s work in either worst-case scenario—whether the county is forced to turn over routers directly to the Senate, or if nearly $700 million in revenue was withheld.”

On July 26, Fann and Sen. Warren Petersen, both Republicans, issued a subpoena to the Board of Supervisors that requested six categories of items, including computer routers and network logs. The board was given 30 days to produce those items.

“The Cyber Ninjas will never be able to touch the routers or access our data,” Sellers said in the board statement. “An independent third party can confirm what we’ve always said: the election was not connected to the Internet and no vote switching occurred. And our residents, law enforcement, and courts can all rest assured that their data and equipment are protected.”

Prior to the board’s 3-1 vote, Board Supervisor Bill Gates, a Republican, called the agreement a “win for Maricopa County residents. It puts this dispute to an end.”

“These Cyber Ninjas will not have access to those routers,” he said.

“We are not dealing with rational people. We’re dealing with bullies,” said Democrat Board Supervisor Steve Gallardo, who cast the opposing vote.

Gallardo called on the board to explore “other options” rather than sign the agreement.

“I think is the wrong direction,” he said. “There is nothing you can do that will satisfy any of these senators. I would like them to stand up and say they were wrong.”

A full report of the audit is expected to be released on Friday, Sept. 24.

Allan Stein
Follow
Allan Stein is an Epoch Times reporter who covers the state of Arizona.